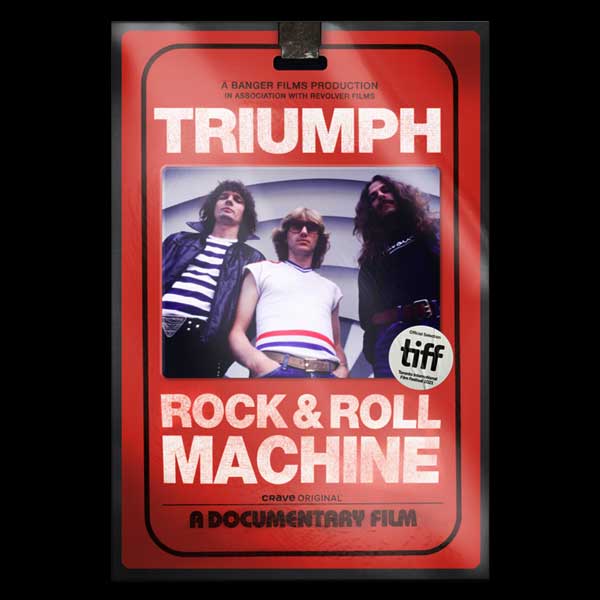 At long last! After so many years of waiting, here comes the first official documentary about the mighty Triumph spreading joy to all their die-hard fans and at the same time giving the opportunity to all those who only knew the basic stuff about Canada’s finest to learn the full story straight from the three legendary members of Triumph. For me personally, Triumph released some of the greatest hard rock albums -especially in between 1981-1987- while “Thunder Seven” should definitely belong to every rock collection out there.

“Rock & Roll Machine” is one of the most intimate, personal and well-targeted documentaries that we’ve ever seen…and that’s the way it should be really. Gil Moore, Rik Emmett, Mike Levine have all agreed to participate on it and most of the footage was captured at the legendary MetalWorks Studios in Toronto (the studios that were established by Moore himself in the late 70s). Up there in a special room/attic, Moore has kept all the Triumph memorabilia from the 70s and 80s while it leaves you in awe just witnessing all those newspapers clippings from the mid-70s that the drummer/singer has kept after all these years! Naturally, when the narration comes down to the heartbreaking period of the Emmett’s departure, things become extremely emotional and it is good to know the reasons behind the guitarist’s hard decision. Nevertheless, it is plain evident that the chemistry between those three musicians is till intact; a fact that it still makes you wonder why don’t they release yet another, last album together!

The archival TV clips, the previously unreleased photos and the guest spots by famous musicians are only some of the highlights of this excellent documentary. But the most unexpected one was when 100 or so die-hard fans visited MetalWorks Studios to check out a special Triumph museum and watch a few advanced excerpts from the documentary. What they got was not only this but a special 3-song live performance by Triumph! The sheer look on their faces is priceless…