Just a few days before the first ever Desertfest to be held in Greek soil, Rockpages.gr had the chance to talk with Oskar Cedermalm of the Truckfighters, a band that lately have become a favourite for the Greek audience. Their new album “V”, their fifteen-year long career, Greece, their constant problems with their drummers and his involvement with Fuzzorama Revords are just some of the subjects of our conversation. Interview: Yiannis Dolas 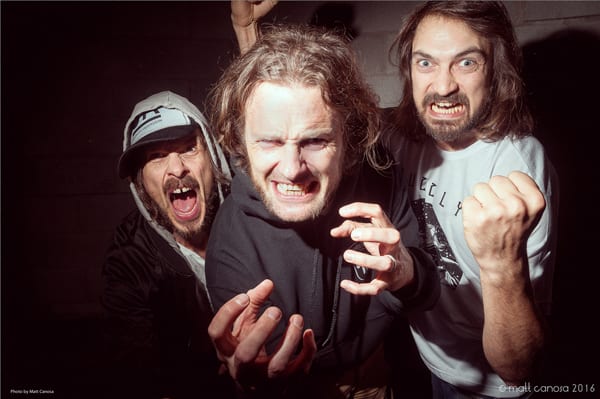 Rockpages.gr: How do you feel about releasing your fifth album, “V”? Do you consider yourselves veterans in the music scene after 15 years?

Oskar Cedermalm: Haha, yes somehow… It seems like we’re still as eager to play music as we where 15 years ago, but I guess we know more stuff now and you also feel more comfortable with what you do. Personally I feel like we’re in our primetime right now somehow, hopefully we can keep being in our prime time a few years more haha!

Rockpages.gr: On this album one can listen to the Truckfighters pushing the envelope a little bit trying to progress and evolve on their sound. Was that something deliberate, or did it come naturally?

Oskar Cedermalm: Everything we do come naturally at least these days… In the beginning we had the intention to play real fuzzy stoner rock, but these days we don’t really care what kind of music we play. We just do songs that we enjoy listening to. I also think it’s important for bands to keep doing new stuff, a lot of our old heroes get a little bit lazy, maybe they earn too much money I don’t know… but it seems like they are just doing the same album over and over again! For me that is so boring, I wanna push myself and try to do stuff that I haven’t done before and I still feel like I’m evolving as both a singer and songwriter which is fun. The day I get too lazy to push myself to the max I will probably stop playing in Truckfighters at least.
Rockpages.gr: How did you decide to write a song and make a video about Lisa Holm’s case?

Oskar Cedermalm: It was something that affected us deeply.. No more comments are necessary, we wanna move forward from that. It got a lot of negative feedback and false accusations. 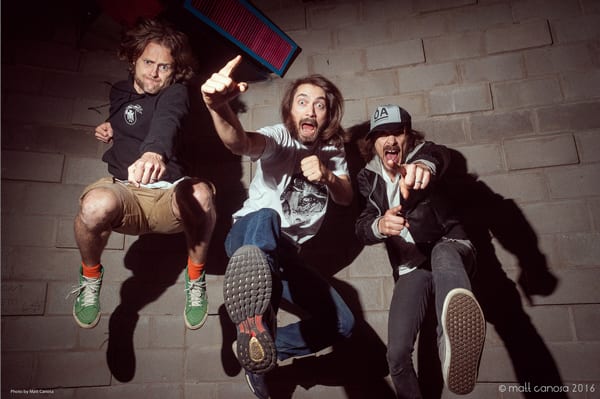 Rockpages.gr: The video was followed by controversial comments and even the accusation that you did it to draw attention, become more popular and all that. What did that whole situation teach you?

Oskar Cedermalm: That is mostly people in Sweden actually, in this country you are sometimes not allowed to stick out 🙁 I can understand some of the comments, but if we wrote a song about a fiction murder, well then nobody would have cared or even paid attention to the fact that people (especially young women) can’t go out at night alone? What the fuck, if we would have written music because we wanted to be famous first of all DON’T play progressive fuzz rock and have songs that are 8 minutes long 😉

Rockpages.gr: I think “V” overall is slower and darker from what you guys usually do. Is that because of your mindset, moody inspiration at the time you were writing and recording it?

Oskar Cedermalm: Yes probably. Can have something to do that we’re getting older, we see more reality in our daily life. When you where young you didn’t care that much about other people, you where more egoistic. Also we had some tough times with firing our former management and that only made us more determined to make the best possible album, to slap those assholes on their noses. Basically, they had a clause that gave us the right to end the agreement without any further actions within 6 months, so we did. But then they got angry. They also owed us money for almost the whole Universe release for two years; we still haven’t got all the money. So these kind of stuff sucks, would probably break other bands, but it only makes Truckfighters more determined and give us more fighting spriti 😉 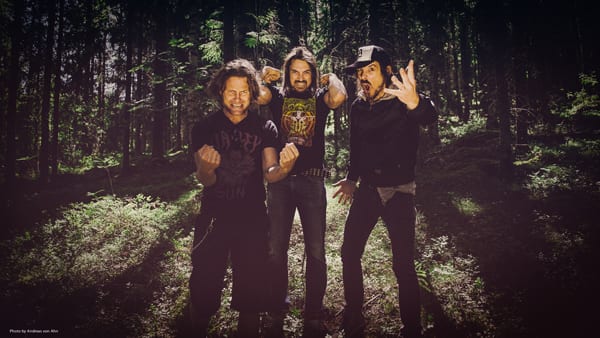 Rockpages.gr: You are releasing albums pretty often. How hard is to stay focused and make quality music that often? Do you feel pressure that you have to keep up the good work?

Oskar Cedermalm: No, we felt more pressure a few years back. We feel like we nothing to prove to anyone.. We’ve been in the business for too long and we know what we’re doing and that we do it good. And as said before, for us it’s not that much of trying to impress to someone or so, we do the music we like ourselves and that’s kind of it.

Rockpages.gr: The album is licensed to Century Media, one of the biggest record companies around at that time, is this some kind of recognition, or a “badge of honor” for the band? How important is for a band to have a record company behind it?

Oskar Cedermalm: It’s not really that important, I mean we released all our stuff on Fuzzorama so far and to be honest now when I’ve seen the work behind a bigger label like Century Media I can proudly say that Fuzzorama is a really, really good label! The thing with a bigger label is that it’s easier to reach out, I mean they have over 1 million followers on YouTube! I would really hope that Fuzzorama could be a bigger label one day, cause it makes some work a bit easier, now you need to struggle more each day to get the attention as the bigger labels. 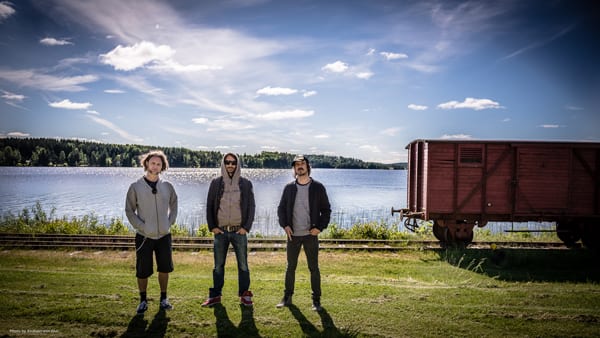 Rockpages.gr: You’ve been in Greece several times, what are the stuff that you like and that you don’t like in our country?

Oskar Cedermalm: Do we need to dislike anything? I think the weather is awesome, been on vacation in Greece many, many times, probably my favourite place.. As many other Swedes think as well 😛 Maybe I’m not fond of how your government handle stuff, I mean in some parts you have a lot of trash on the street, I know it’s not the fault of the people living there… It’s based on the fact that the government or the local politician doesn’t do what is necessary.

Rockpages.gr: Do you know any Greek words? Any Greek bands?

Oskar Cedermalm: Nope nothing, I tried to learn other languages for years but I’m totally worthless I can barely say any German words either even though I’ve played there like 200 times 😛 I’m also bad in remembering names of bands we’ve played and bands that make it to Sweden from Greece is not usual. Sorry mate.

Rockpages.gr: How do you feel about playing at the first ever Desertfest festival to be held in Greece?

Oskar Cedermalm: Cool of course, I think it’s good that this movement keep spreading, hopefully one day all the Desertfest festivals will be big so we can make some changes in the music stream of today… Maybe influence the radio to play more rock and fuzz! 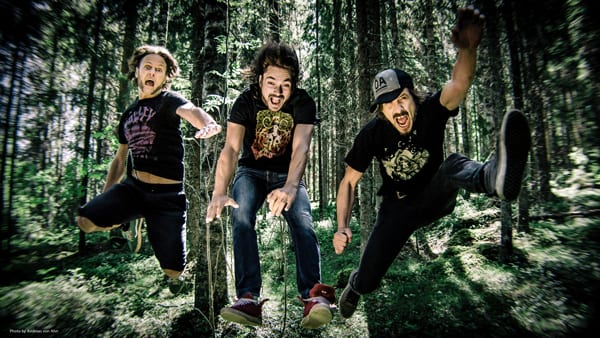 Rockpages.gr: Is there a little Greek influence on the album cover of “V” with the marbles and stuff?
Oskar Cedermalm: Yes of course, that is kind of the influence that is going on, the ancient Greek, but we also mixed in a few airplanes haha… Just to make the album cover a bit timeless.

Rockpages.gr: Greece has been struggling in politics and economy and the situation is pretty harsh for the people here. What can the bands in the country do to rise? What would you do?

Oskar Cedermalm: Hmm, not sure, it’s really, really hard to tell… I think we all should try to make people a bit more aware of other people. I’m not a politician and I can honestly say I’m not really conversant enough to make any judgment.. I know you struggle a lot with the economical part, and I really hope that it will get better for you soon… But I don’t have any magical solution for you sorry…
Rockpages.gr: Do you feel comfortable under the “stoner” tag?

Oskar Cedermalm: Sure, people can call us whatever they like, but the funny thing is that I personally never smoked a joint in my whole life, not even tried!!! Back in the day people could come up to me and say things like “maaan, that song is so rad and psychedelic, you must have been high as hell when you wrote that”… When I say no they don’t believe me haha… But for me it’s more important to create something that feels in your sole and heart, not something that you come up with cause you’re drunk or high. That doesn’t do it for me… 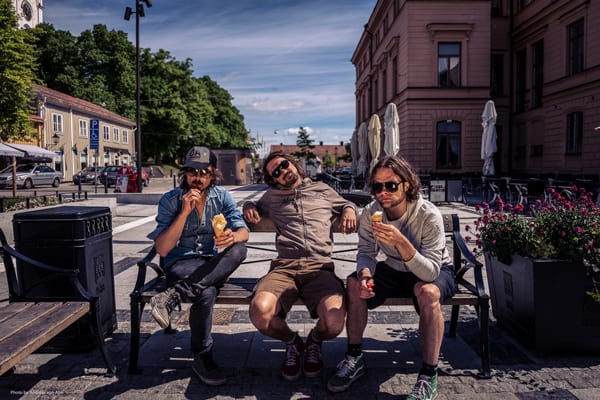 Rockpages.gr: You still have a Spinal Tap story with your drummers! How is that working out and who is going to play with you at Desertfest in Athens?
Oskar Cedermalm: Haha, to be honest, we’re not totally sure yet who’s going to drum on Desertfest Athens haha… Yeah, it’s a bit annoying but at the same time we also got used to it. I guess it’s our destiny to never find the right drummer… I think it must be tough to join a band that has been around for 15 years, I mean me and Dango we did breathe, shit and eat Truckfighters for so long… And we also took the long, long road with a lot of struggle and mileages on the road on shitty clubs to get here. So when we play in front of a lot people that is the receipt for us and also the goal of our lives kind of, but for a new drummer it might be a bit unreal and he doesn’t really “feel” it the same way as we do, cause he wasn’t with us when we had to fight really hard to do what we do… And also we might be two really boring people on the road, we sit with our computers all day long, we almost never party anything, rarely drink at all…?

Rockpages.gr: Apart from the Truckfighters you are involved in Fuzzorama Records, do you consider things about the band from the label’s side since you’ve got that experience too?

Oskar Cedermalm: Sure, but it’s all connected, you need to have a label to get gigs, but you can’t get a label if you have no gigs… So it’s tricky for bands today, but it might have been even trickier for us back in the days.. Internet didn’t have the spread it has today. We’ve learned a lot from having our own label, but we probably also worked more than any band in the world I would say… I never had even 2-3 weeks’ vacation when I’ve been completely off for the past 10-12 years… SO maybe someday we need to find people to employee at Fuzzorama so we can slow down a bit and enjoy life and our families a bit more 😉 But on the other hand, we LOVE what we do… So we’ll probably continue this way until our hearts or/and bodies say no hahaha! 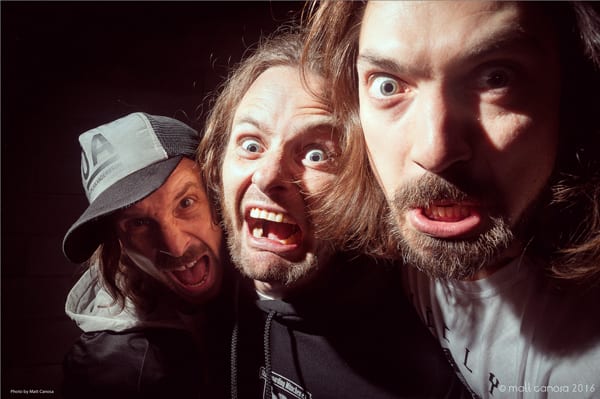 Rockpages.gr: What would you say that the highest points are in your career so far?
Oskar Cedermalm: It’s yet to come I would say… I really believe we have at least a few fantastic albums left and I could see the band become a bit bigger as well…

Rockpages.gr: Send a message to the Greek fans!

Oskar Cedermalm: Come and rock out with us, share the energy with us and headbang the shit out of Desertfest, show us that you’re the craziest people around hahaha!!! 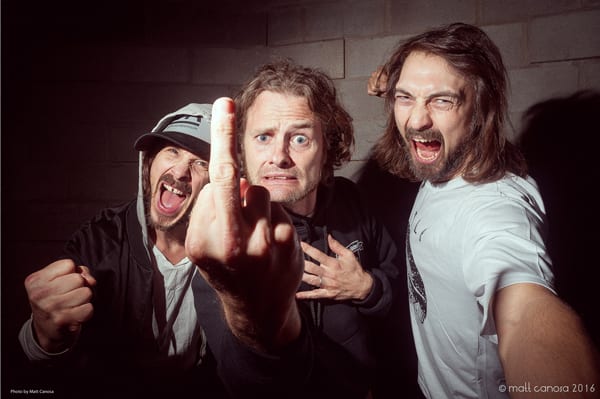