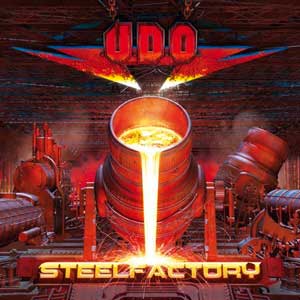 The fact that The General toured for three whole years under the Dirkschneider tag surely had its rightful influence on the new U.D.O. album (let alone that we were more than happy to be treated with all the Accept hits with the original voice).

Upon listening to “Steelfactory” for many times in a row I must say that this is the closer that Udo Dirkschneider has come to the classic Accept sound since the second chapter of U.D.O. started with “Solid” back in the mid-90s. This is a great sounding record and the overall result is more than successful as every single notion of experimenting on the production department has been abandoned.

“Steelfactory” bears all the trademark elements that made U.D.O. a great band. Especially the guitars are inspired and well-crafted especially during “Blood on Fire” (with the usage of “Kalinka”…a well-known Russian composition of the 19th century written by Ivan Larionov), “Raise the Game” (with the middle-eastern melodies) and the Maiden-esque “One Heart One Soul”.

We should also point down that Stefan Kaufmann has co-written three songs while the best cut on the album is the amazing bonus track “Pictures In My Dreams” that’s why I recommend the digipack CD or the vinyl edition.

All in all, “Steelfactory” is a dynamic comeback album for U.D.O. that won’t disappoint anyone!