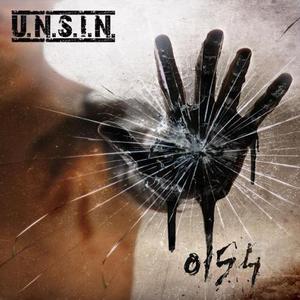 After having played several shows, it was about time that we had something in our hands from U.N.S.I.N.. For those of you that are not familiar with what the band is all about, here is some knowledge: they play modern metal with clean female vocals. Their influences are varied, but most of them seem to come from the ‘90s. There are times that you think you listen to Black Label Society jamming with Pantera, and Fight, but the vocals are melodic, and warm, without exaggerating, no falsettos, or soprano style.
In general, U.N.S.I.N.’s sound is very special because of the way they manage to combine the heaviness of their music with Christina’s clean vocals. The truth is that we rarely find bands with female vocalists that don’t sound like “gothic metal meets Evanescence”, or really brutal, nowadays. One other thing we also see scarcely is the band’s passion and love about music that led them self-finance their work, and do everything by themselves.
We’ll be waiting for a full length album, hoping that it’s at the same level with this batch of songs, and we wish they set the example for more Greek bands to avoid clichés, experiment, and create sticking to their own guns.