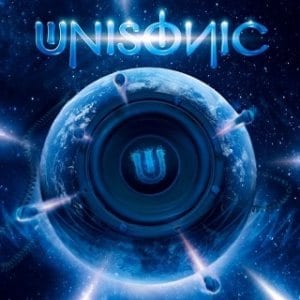 Almost 30 years ago some journalists asked Paul Stanley to give them his explanation on why “Lick It Up” has exceeded in units the numbers that “Creatures of the Night” has done 11 mere months ago. The frontman of KISS gave a laconic answer: “Sometimes people tend to listen with their eyes”! And as a matter of fact, he was dead right as “Creatures…” had nothing to be jealous of “Lick It Up” yet it was time for KISS to move on without their trademark make-up.
Some of you might wonder what’s that has to do with the debut Unisonic record…? Well, we will get to that shortly…For starters, the introductions: Unisonic is Dennis Ward (Pink Cream 69), Kosta Zafeiriou (Pink Cream 69), Mandy Meyer (Gotthard, Krokus), Kai Hansen & Michael Kiske…no parenthesis, of course, on those two last names. Only with the sheer announcement of the collaboration between the person who gave birth to a genre (Hansen) and his old pal from Helloween (Kiske) who happens to possess one of the greatest voices in the heavy metal world, the anticipation and the expectation were great due to the rich and illustrious past.
The first video for the title track simply does justice to what I wrote in my first paragraph of this review. Without being something extraordinary, the track almost subconsciously made you like it…quite possibly because Kiske’s voice remains intact and fantastic and Hansen is standing right beside him with his guitar (bringing in mind those glorious 80s moments). So, I “caught” myself being carried away with the listening of the album and at the same time being influenced by the presence of those two musicians. But after many listening sessions, what’s the conclusion regarding the quality of the album? The album revolves around the melodic hard n’ heavy sound without many guitar outbursts as Hansen is more or less restrained to the absolute necessary riffs and solos. The songs breathe an air of a commercial vibe and in my humble opinion they cannot be evaluated as nothing more than “simply OK”. Surely, there are in there some fine moments like “Renegade” (the best cut on the album), “Never Too Late” (that brings in mind “Time To Break Free from Gamma Ray’s “Land of the Free”) and “Souls Alive” (with its “Pink Bubbles…” references) but that’s as far as it goes.
Unisonic delivers a “simply OK” record…that’s the God-honest truth. Will we go see them in concert…? Hell Yeah!

Highlight: The “Ignition” EP includes a live version of “I Want Out” which is absolutely brilliant!