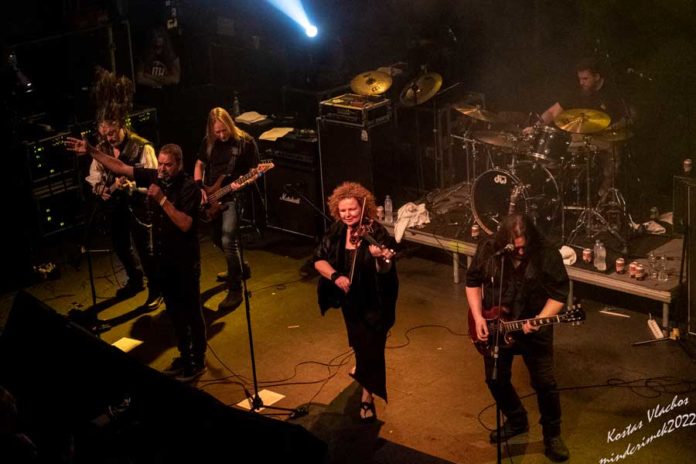 “Pick up the fragments and piece them together…”

After 27 months of cancellations, displacements and other painful changes Up The Hammers festival has returned and although wounded most of us were really happy that could finally attend its 15th version (ok due to cancellations it became 16th) of a festival that has become many years now one of the most important underground european metal festivals. After all, setting up a festival based on classic metal tunes during the general uncertainty all over the world is definitely a success just to try it. The first day of the festival was a highly successful day with the always enjoyable Skyclad that set up a folk metal party, the epic-ness (sic) of Atlantean Kodex (one of the highlights of the festival), the impressive Sacral Rage, the surprise of mighty Zemial, the legendary greek band Spitfire but also the other bands like Dexter Ward, Mirror and White Tower.

“Lay down your bottles and begin the last round…”

So, after the usual Warm Up gig that took place on Thursday we were read for the first full day of UTH festival and I was wondering how many fans would attend it this years. The sold out shows of pre-covid era are just a memory and it was no surprise there weren’t many fans from abroad like the last time but still quite a few were there and we had the chance to talk with people from all over the world. I like to go to the festival early because I don’t want to miss the new blood that usually are forced into the unglamorous role of the opening act. WHITE TOWER (a new band from Thessaloniki) were on stage at 15:30 and they were full of energy presenting their music which is like a tribute to their idols, the iconic Accept. But they are not a tribute band, they have their own compositions and for 40 minutes they had the chance to present live their debut album, an album that is full of songs that cry out to be heard live on stage. Guitars sounded a bit low but it didn’t really matter, their old-school sound was the ideal kick off for the festival.

16:25 and MIRROR from Cyprus got on stage. They recently released the album “The Day Bastard Leaders Die” which I didn’t have the chance to listen properly before their show but hopefully they added many songs from their oldest stuff. People seemed to enjoy their energy, their style combines nicely classic 80s metal tunes with 70s heavy rock elements but they are doing it in a nice way so it doesn’t sound dated. Mavromatis was enjoyable on vocals during their 45 minutes long set. Another great show by Mirror after the one at Into Battle festival in 2019.

“We lose all control when the stage is alight…”

After Mirror people went outside for the usual break, actually this is something common between each band, people start to get out and they return twenty minutes later. It’s the only way to breath some air, relax for a while and maybe walk some blocks away to eat something (unfortunately this year the tavern opposite the venue wasn’t open so you need to plan ahed which band you will miss).

Anyway, at 17:25 DEXTER WARD got on stage, it is a band that is connected with UTH festival of course because some of its members are the organizers too. They are familiar to festival audience and their style is quite matching with UTH character. Their power/epic metal which is not memorable but definitely enjoyable and ideal as you drink cold beer. Like in Horns Up festival last years they had Vangelis Krouskas (Valor) on vocals that didn’t have any problem and performed their catchy songs that were taken from all their albums and they closed with the usual suspect, “Metal Rites”.

“A dark star falls from the dying worlds…”

At recent Metal From Hellas festival that took place on March SACRAL RAGE had to cancel due to covid in their team and I was really disappointed. But hopefully the organizers announced their appearance on the billing of UTH and brought smiles to our faces again. This is an incredible band that manages to impress me every time I see them on stage. Their futuristic power/speed metal is out of this world and their performance is outstanding. Dimitris Kartaloglou stunned everybody in the venue with his vocal range but of course all of them are great players. Amazing guitar riffing, great bass lines and drumming, truly a trip into other dimensions.

“Here they come across the street…”

Right at 19.30 SPITFIRE got on stage. The legendary Greek band (one of the first Greek metal bands, they were formed in 1984) released recently a powerful new album so they had the chance to combine songs from this along with older stuff, especially the classic tunes from “First Attack” album. Their set lasted for 45 minutes and they didn’t forget some compositions from “Die Fighting”, they actually started with a song from this album. Elias Loginidis (the only original member) is not just a leader, he’s a real cool guy that seemed to enjoy their show as much as we did and it’s really worth it because he has been through a lot but still keeps the flame burning.

“A black wind of pain is cleansing the land…”

Yes, we can talk for hours about the bands we didn’t manage to see due to the cancellations but for me ATLANTEAN KODEX was more than enough not to miss them and actually this time we had the chance to see them twice! They performed a full headline show on warm up the previous day and they were great but we love them so much and wanted more. This time they got on stage at 20:45 and for 50 minutes they gave us pure epic magic. Their setlist was slightly different but it didn’t really mater since each and every of their compositions is an epic that made us feel emotionally uplifted once more. This German epic band is probably on top of epic metal scene the last years, they have great albums and their concerts are superb. Marcus Becker’s vocals are the vehicle to an epic journey through their stories all the musicians are great and knew exactly what they had to do, especially Coralie Baier with her Bathory t-shirt that was really into Atlantean Kodex music world screaming out loud the lyrics.

It is really impressive that although their composition are long they never get boring and kept us there through out their set, no surprise they got the warm sincere applause from everyone in the venue. They have really worked hard on and off stage and worth to have the recognition they get now. Last but not least they are also really down to earth and easy going characters.

“From darkness grows light, from ashes a fire…”

Then we supposed to see Ostrogoth (great Belgian band from the 80s) but, oh yes, another cancellation just a few days before the festival. Hopefully they organizers didn’t waste any time and they brought ZEMIAL. Although they are a historic band of the extreme Greek underground I felt surprised by their choice because their style didn’t seem to match with the rest of the festival. But after seeing Yoth Iria at Metal From Hellas festival it seems we have reached a point where the fans can -at last- walk out of their comfort zone.

It’s been some time since I saw Zemial live in Athens. It was back in 2011 at An Club with Proscriptor on stage when they gave a great show. But I lost track with them lately apart from some live videos from concerts abroad and it’s a pity because I really like this band when they play live. Their show didn’t start very well due to some technical issues with the microphone but the problem got fixed and then there was no return, their machine was in full charge and they teared down the venue with prog black metal tunes and a great performance by Vorskaath. My personal favorites like “Full Moon Necrophilia” were there of course along with many others, including some new stuff that fitted nicely with the old stuff. Yes, many may say they are not pure black metal but it’s been many years now since Zemial moved forward and started to experiment with many different elements in their music. Actually, this is exactly what kept me close to them all these years.

“Where the past meets the present we walk hand in hand…”

Thirty minutes to midnight the time had come for the headliners of the day, the mighty SKYCLAD. The British band has a special bond with Greece the last three decades. Their legendary shows at Rodon Club back in the 90s have left their mark and the old fans still talking about that era and Martin Walkyier but the band kept playing music after that and every time they played for us they left us fully satisfied, especially during that incredible show at Temple Club three years ago.

“If you are without sin come cast the first stone…”

How can you not have fun and enjoy the show when the band decided to throw in “Spinning Jenny” and “Emerald” at the beginning of their show? Yes, they are that confident and no surprise the show took off from there and yes, indeed we experienced once more a true pagan fiesta. Georgina Biddle’s violin, the guitars, the voice of Kevin Ridley (I hope to see him again soon with Theigns & Thralls too) that had no problem to interpret the great lyrics of their songs. You could see it everywhere, on the numerous smiles on and off stage, on the dance, on the raised beer glasses, everything was set for the folk metal orgy by Skyclad that made us screaming lyrics like “if life is sweet then I’m diabetic” during the great “Just What Nobody Wanted”. When the lights turned on we were overcome with joy and full of adrenaline…

earth mother the sun and the furius host / spinning jenny / emerald / cry of the land / the wickedest man in the world / cardboard city / the one piece puzzle / just what nobody wanted / land of the rising slum / no deposit no return / the widdershins jig / history lessens / another fine mess / penny dreadful / inequality street / thinking allowed? / the antibody politic / anotherdrinkingsong / great blow for a day job / the parliament of fools / the declaration of indifference