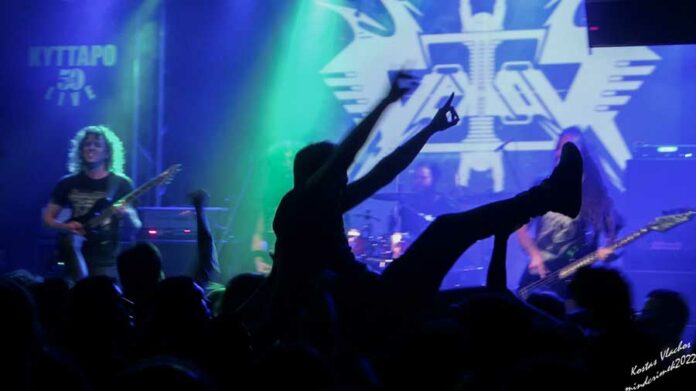 Six years have passed since Vektor’s first visit to Greece. Six years since they disbanded during the best phase of their career and then followed the lies that stigmatized them and David DiSanto. But recovery came, they are back, the truth has been restored and this tour amply proves it.

The night started with Desert Near The End from Athens in a relatively empty venue. The power/thrash metallers gave a convincing performance. I may never really liked their style in the five full-length albums they have so far, but I had a great time seeing them on stage. With a very good sound as an ally, they managed very well the changes from the fast, blasting thrash parts to the more melodic and at times epic elements of their music. Another positive fact is that although “The Dawning Of The Son” was released earlier in the year, the setlist was shared between their last three releases.

Setlist: Season Of The Sun, Wound My Way, Point Of No Return, Throne Of Martyrdom, Rise For Dominion, Iron Rain, Of Fire And Stars

Up next were Dutch tech thrashers Cryptosis, who are impressive in what they have achieved in their two years under this name (preceded by another seven as Distillator); their debut album through Century Media, a split EP with Vektor and now a tour with them. What impressed me is that even though it’s a power trio, which is not common in technical metal, I didn’t feel that the sound lacked something, nor did I think that a second guitar would be needed. An excellent performance in which they played last year’s “Bionic Swarm” in its entirety. They also won over the crowd, since at the end there were many who greeted them, took photos with them and paid a visit to their merch stand.

Then, finally it was time for the headliners. And I think only one word can sum up their appearance on stage: chaos. Vektor is one of those bands that if you see live and play an instrument, there are two options. Either you give up forever or you persevere and practice endlessly without sleep to get close to their level. It’s not just that they played flawlessly in this paranoid structured chaos they call music, it was also the annoying comfort they had in doing so. They hardly broke a sweat. With a very good sound and a tremendous mood, they very easily stirred up their fans who constantly deified them. In “Black Future” we saw the first stagediving, DiSanto introduced the band with titles that would make Game Of Thrones jealous, while after “Tetrastructural Minds” he told two great jokes that dropped the temperature of the room. Who was the face of the night and not without reason. After what he’s been through, it was liberating to see him smiling on stage and to hear either his eerie extreme vocals or the very nice melodic ones in this different musical direction of Vektor that is here to stay. A seminar on how to perform live on stage.

In conclusion, we experienced a very nice evening that we will remember for a long time, with three bands that gave their best. The negatives were the delays, since Desert Near The End and Cryptosis came out thirty minutes after the scheduled time and Vektor forty-five minutes later, as well as the short duration of the headliners’ performance. Other than that, I hope to see them again soon.