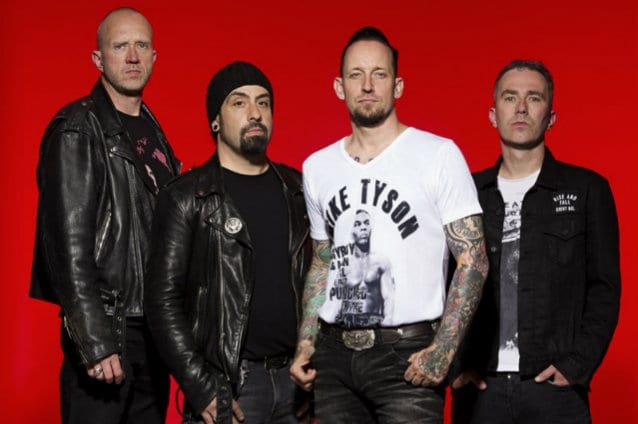 Michael Poulsen of Danish/American rock ‘n’ rollers VOLBEAT has confirmed that the band has commenced the songwriting process for the follow-up to last year’s “Seal the Deal & Let’s Boogie” album. “I’m always inspired, and we already have certain new songs written,” he told the 99.7 The Blitz radio station at this past weekend’s Rock On The Range festival in Columbus, Ohio. “But new things are happening. I just became a father a week ago [to] my first child, so now it’s a life change. Who knows how the new songs are gonna sound like? But it feels good when you’re done in the studio, and you don’t wanna see the studio for a long time and you don’t wanna sit home and write. But you also come to a point where you wanna get back to the songwriting and get back to the studio and back on the road and play new songs, because it can also get boring playing the same old songs all over again. So it’s always great to find that inspiration for writing new songs and recording.”
According to Poulsen, five songs have been written so far for VOLBEAT’s seventh album, three of which “are very heavy [and] more uptempo” while two are “more melodic rock songs.”