Many years now Amon Amarth are one of the best metal bands. They achieved that after a lot of hard work and now they enjoy the love and respect of many metal fans, even from ones who generally don’t like extreme metal. 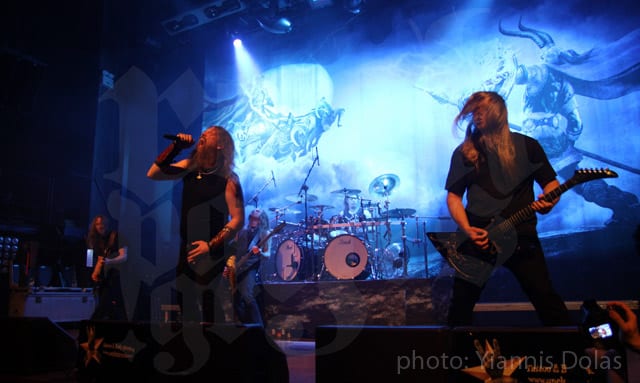 They were founded in 1988 as Scum and in 1992 they changed their name to Amon Amarth, something that they took from the magic world of J.R.R. Tolkien and is Sindarin for Mount Doom. Their lyrics however are inspired by the mighty Vikings and the Norse mythology. After a demo tape and an EP, their terrific debut album was released in 1998 and since then they have only great and amazing albums to show for. Death metal with many doses of melody (especially in their later releases) and epic feeling in an excellent combination. When you listen to them you imagine boarding a drakkar and sail to plunder distant lands in the name of Odin. Their latest creation, “Jomsviking”, is a concept album that in Greece took the 5th place on the music charts! Their trademark is of course Johan Hegg, the charismatic gentle giant behind the microphone who is also one of the best frontmen of our times.

As for their live shows? This is where the big bands are separated from the small ones and the Swedes prove that every time they perform. They are touring endlessly, they keep getting better and better and the last years they have a Viking set on stage that includes even actors who fight on stage, an inspiration that came from Manowar. They have played four times in Athens: 2007 (Gagarin, support Battleroar), 2009 (Fuzz, support Heathendom), 2012 (Fuzz, support Karma Violens) and 2014 (Fuzz, support Karma Violens). I was lucky enough to witness three of them, so all I have to say is that their upcoming live show is a must-watch. Especially this year with their fellow countrymen Grand Magus as special guests. A deadly duo that will definitely give us a night to remember. So, until then…raise your horns, raise them up to the sky, we will drink to glory tonight!