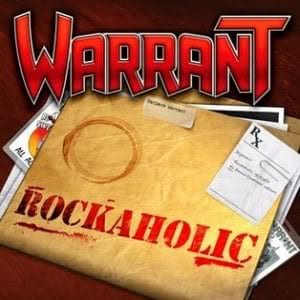 After many years of ups and downs and countless “come and go” by Jani Lane, Warrant, finally, made the wise decision to carry on with a new –superb, by the way- singer (Robert Mason, ex-Lynch Mob) who brought along a much needed peace and normality to the band. “Rockaholic” is Warrant’s brand new offering and the first since 2006 (for those of you who didn’t catch up with them lately).
From my perspective, “Rockaholic” sounds like a well-balanced sonic assault with a stunning production by the legendary Keith Olsen. On the one hand, we are treated with such songs as “Tears In The City” (my favorite one), “Sex Ain’t Love”, “The Last Straw” that remind of the good old 80s and on the other hand, the band attempts a slight move towards a more modern –rock n’ roll, nevertheless- path with songs like “Cocaine Freight Train” and “Dusty’s Revenge”.
Now, those who expect the atmosphere of the trademark Warrant hits “Cherry Pie” or “D.R.F.S.R”, well, think again as “Rockaholic” offers a more straightforward rock n’ roll approach…and we like it!
Highlight: The cover perfectly reflects the album’s title”…