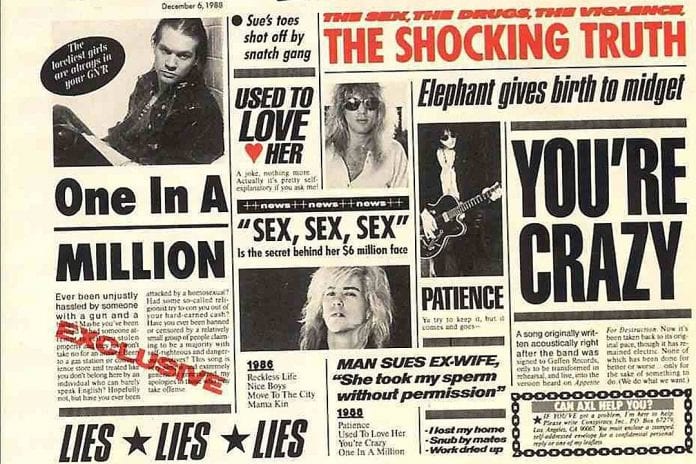 With three discs of outtakes and other recordings from the era, Guns N’ Roses’ recently announced box sets for their groundbreaking 1987 debut Appetite for Destruction provide an expansive look at the band’s early years. But one track is conspicuous by its absence: the controversial “One in a Million,” which closed out their 1988 EP G N’ R Lies.
The second disc of the “Locked N’ Loaded” edition of the set, B-sides, EPs N’ More, consists of their 1986 Live ?!*@ Like a Suicide EP, the five non-album b-sides from Appetite’s singles and three of the four acoustic songs on Lies. It appears to have been a deliberate decision; the press release doesn’t reference the title of either EP, and the only mention of Lies’ existence is where it notes that the acoustic version of “Move to the City” stems from those sessions.
At a time when bad press followed Guns N’ Roses everywhere, “One in a Million” was yet another headline-raising moment, leading to accusations of racism and homophobia due to its use of the words “n——” and “f——” as well as anti-immigrant sentiments. Axl Rose has said that he based the lyrics on his first impressions of Los Angeles when he arrived from small-town Indiana. In a Rolling Stone interview in 1989, he described “a large number of black men selling stolen jewelry, crack, heroin and pot,” being chased out of a convenience store by a man from the Middle East with a butcher’s knife and having had “very bad experiences with homosexuals,” including an attempted rape by a gay man.