Greece was never the most productive country when it comes to the release of hard rock albums. But even in the very difficult period of the 80s, when in order for a Greek outfit to ink a deal with a label was as easy as the winning of the Champions League trophy by West Hum United, some bands made the difference and left behind a bunch of albums that are still considered classic. We are talking about Douglas, Raw Silk and Nok Aout (just to name three of them). Their albums are very hard to find and the younger generations should be satisfied by what floats around in the infinite well of the internet.

Nok Aout was a real special case. They blended the FN rock genre with Greek lyrics thus making it more accessible to the Greek market. At the same time they gave a headache to the head of 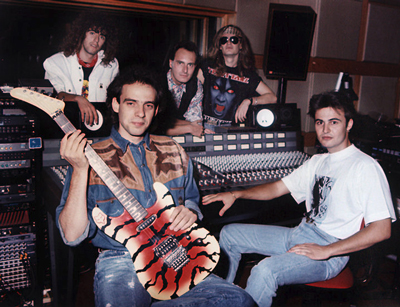 PR department of their label as it wasn’t the easiest thing to promote their album. The tags might not be useful all the time but they can be quite useful when it comes down to the marketing of an album. What exactly did Nok Aout play? Rock, Pop, Hard Rock…? This was a constant question among the fans that got to listen back then the album. In my mind, Nok Aout was always a fine sample of melodic, radio friendly rock perfectly adjustable to the needs of the Greek market.

So, what happened to them? After the release of their self-titled debut in 1990 they disappeared. And it was really sad because their video-clip for the song “Psema Sto Psema” had a decent airplay among the TV channels while other songs from the album were also played on the radio. The truth is that the band’s guitarist and founding member Yiannis Salihos had to face a serious problem with his hand that forced him to abandon any plans (if there were any that is) of coming up with a sophomore effort. For the record, Nok Aout had a 5-year contract with BMG and the label’s president, Miltos Karatzas, was totally supportive of them.

Yiannis  Salihos is staying permanently in Sweden, Haris Karaolidis resides in Dubai, Terry Mavridis is still around playing music and being on stage with the famous Greek artist Michalis Rakintzis, Dimitris Christopoulos is in the island of Rhodes, Rory Christopoulos has a band called Euphoria Duet while Christos Giatroudakis is always eager and ready to hit the stage whenever he finds an open opportunity! 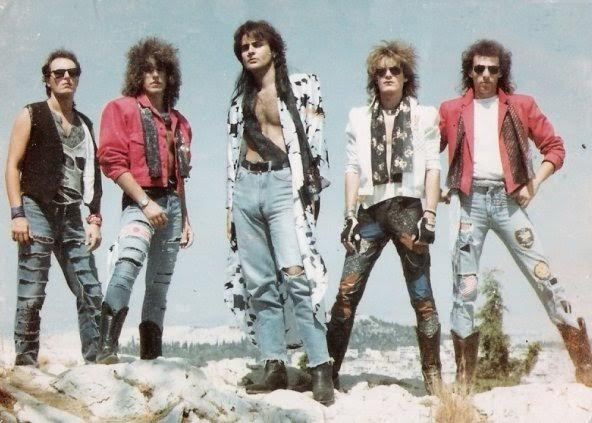 Recently, I had the pleasure of meeting and talking with the guys. Naturally, the topic of our conversation revolved around Nok Aout and the overall 80s Greek scene. I told them that night and I repeat it once again here: their sole album is a classic one and its impact is huge among the fans that are still in search of it after 25+ years! Hopefully, there will be a reissue on CD format sometime in the near future….

Trivia: The album sold 4.600 copies in the first year of its release.