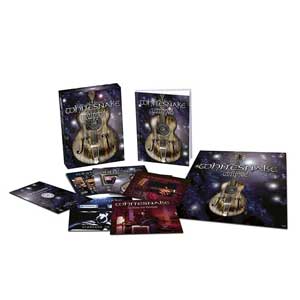 Since the release date for “Flesh & Blood” was pushed back, Rhido decided to fill the gap with something really special. “Unzipped” is a box set that includes the acoustic sessions by Whitesnake (meaning those of Coverdale with Vandenberg and later on with Aldrich) from 1997 up to 2015. “Unzipped” comes in a regular and deluxe CD edition plus a double vinyl. But right now we will focus on the beautiful box set. I must be clear right from the start that you won’t find yourself listening on a constant basis this bunch of songs. These are some acoustic versions –mainly vocals and a guitar- and most songs can be found numerous times as the box set depicts various live performances almost in back to back days. Naturally, we are treated with the same songs so this is a box set aimed towards the die hard fan and collector.

Upon opening the box set, we get to see 5 CDs, a DVD, a well-crafted hard cover 60-page book, a booklet that includes lyrics and a poster with the Unzipped cover artwork. The first CD includes cuts from “Good To Be Bad” and “Forevermore”, the song “Love is Blind (cued from “Into The Light” plus an unreleased ballad called “All The Time in the World”. As a bonus feature we get to listen different acoustic versions of “Wherever You May Go” and “Love is Blind”.

The second CD is essentially “Starkers in Tokyo” that was first issued in 1997. Two additional –and actually not so interesting- songs are included: a small excerpt of “Fool For Your Loving” and an a capella version of “Only My Soul”.

On the third CD we experience the live acoustic shows of Warsow (1997) and Stockholm, Cologne, Paris (all cued from 2006). More of the same on the fourth CD with the additional rehearsal stuff from the ear when Doug Aldrich was the main Whitesnake axeman. Actually, the fifth CD is the most important of them all as it includes various unreleased stuff and sketchy ideas of songs by Coverdale that never materialized on a Whitesnake album. 25 song ideas can be found on the fifth CD.

Last but not least is the DVD that includes “Starkers in Tokyo” plus various acoustic shows throughout the years, interviews, slide show, the acoustic promo videos of “Forevermore” and “Love is Blind”.

This is a must have for every Whitesnake collector out there. Personally, I preferred the deluxe Box Set edition although I won’t get to listen to that stuff on a daily basis.