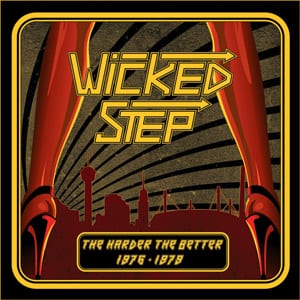 It was the late 70s…an era, when disco music and AOR dominated the airwaves of FM radio and monopolized the interest of the various record labels around the country. As it rarely happens, there were a few exceptions to the rule; some bands that refused to compromise and give in so as to make a few extra bucks and gain popularity by playing short-lived trendy music. San Antonio’s Wicked Step is such a prominent case. This was a band that tried for almost five years to win over a most conservative and reserved audience and partially succeeded as they build slowly yet steadily a small fan base.

Up until now, all those who wanted to listen to Wicked Step’s songs, they had to search high and low in the underground bootleg circuit and sometimes they had to pay big money for them. Luckilly for all of us, TMU Records gathered in one 12’’ vinyl all the known Wicked Step demos from 1976 up to 1979 and they are now widely and easily available. Naturally, the sound is raw and not well-crafted in a state of the art studio. This is a bumch of demos we are talking about but rest assured that the pure energy of the band and the sheer excellence of the compositions make it up for this sonic disadvantage in the production department. There are moments in there that bring in mind Montrose and Frank Marino with a slight touch of early Judas Priest and traces of the (then) newly-born NWOBHM.

So, it’s better late than never and all the fans of pure hard rock music should definitely visit the following address for a copy of Wicked Step’s demo songs: http://tmurecords.bandcamp.com/album/wicked-step-the-harder-the-better-demos-1976-1979-12-vinyl

Highlight: “The Harder The Better” comes in three different editions by TMU Records and in a very affordable price.