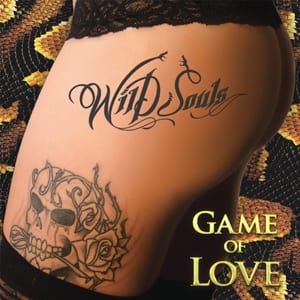 It seems that in the last few years there’s evident a systematic and well-executed effort in the northern part of Greece as lots of up and coming bands appear steadily in the wider hard rock genre. Wild Souls is a perfect example and “Game Of Love” is their sophomore effort after a really good debut album called “On The Road” that was released back in 2013.

Although my first taste with “Game Of Love” came via the video-clip of “Dirty Mind”, I was absolutely blown away by the song “Shame On You” for which the guys shot a very beautiful clip, too. If we wanted to point down the major difference between the new record and its predecessor, I’d definitely say that this is a more guitar-oriented effort as the axemasters of the band (Kostis Tsiligiris & Nikos Karagiannis) have come up with some really impressive guitar work! “Game Of Love” balances over a commercial blues rock sound that is quite similar to Whitesnake (and why not Thunder) and a melodic rock/AOR touch. My personal point of view is that this latter, melodic style fits better to Wild Souls as the best cuts on the album are “Moonlight”, “I Need Tour Love”, “Rock My World” and of course theaforementioned “Shame On You”.

I truly believe that with such well-crafted albums the local hard rock scene has nothing to be jealous of the rest of the albums that are released nowadays in other parts of the world. The only thing that you need to do is to listen without prejudice. “Game Of Love” is an exceptional album and Wild Souls is a band that should not be left under your radars.