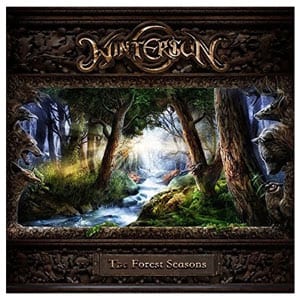 There is no doubt that the fans of Wintersun are very loyal to the band and support them with all their capabilities whenever needed. The reason? The band requested through the popular crowdfunding campaign Indiegogo 150.000€ in order to build their own studio. The result was amazing. Not only this sum was raised in one day, but it stopped in a total of 464.330€. Not bad for a band that since 2004 has released only three studio albums, with the third being released after this request.

But the final outcome is something that we were all hoping for, as this is one of the best releases of this year. I had great expectations from it and this is way above them. A truly majestic album. It may have only four songs, each one dedicated to one of the four seasons of the year, but in total they are almost one-hour long. Yes, they may be long but they are structured in a way that they expand perfectly without getting the listener all tired up. Their style can be characterized with many words, as it involves elements from melodic death metal, symphonic, black, folk, harsh vocals, clean vocals and choruses. Jari Maenpaa, their leader, says that they are playing universal metal and to be fair he has a point. Wintersun follow their own path filling successfully their music with many different elements and influences.

“Awaken From The Dark Slumber (Spring)” and “The Forest That Weeps (Summer)” are two epic songs that are similar to each other, as the seasons, based mostly on melodic death metal. “Eternal Darkness (Autumn)” that follows is exactly what the title says, as it is mainly a black metal song. Last but not least is “Loneliness (Winter)”, a melancholic song with clean vocals that is truly magnificent and concludes ideally this magnificent album.

Wintersun promised for years to release “Time II”. They didn’t do it but I think that they rewarded the fans for their patience with “The Forest Seasons”. Now that they have a studio of their own, I hope that their discography will be more frequent from now on.