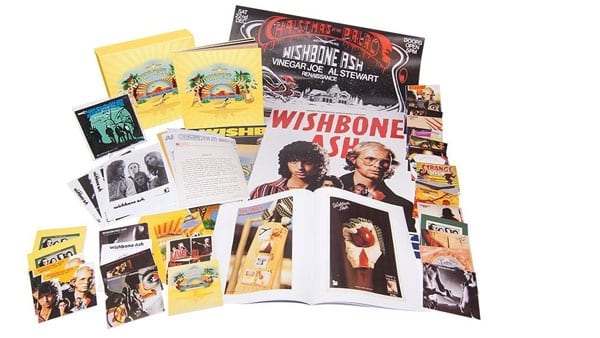 Wishbone Ash will release a limited edition box set packing in thirty CD’s and containing material from 1970 to 1991. Specifically, it contains all 16 studio albums, along with outtakes and b-sides, and the three original live albums Live Dates, Live Dates Volume Two and Live In Tokyo. Eight previously unreleased live albums which were recorded between 1973 and 1980 are also included. There’s also a new interview with the band, a lavish 156-page hardback book, a 36-page poster book, four reproductions of original live posters, a 7-inch flexi disc for the single Blind Eye and individually signed photos of Martin Turner, Andy Powell, Ted Turner, Steve Upton and Laurie Wisefield.
Martin Turner says: “I looked after most of these tape recordings for decades, wondering when they would ever see the light of day and I am very glad that they will at last be available for everyone to hear. It’s almost like having one’s whole musical life in one box. It certainly represents the most comprehensive Wishbone collection that I know of and I hope you enjoy it”, he adds. “It’s truly amazing to look back at the musically fertile 70s and 80s and wonder at the sheer amount of incredible creative output from our band. We had great roots and a really strong blue-print for success. I feel blessed to have played my part in it all and I’m truly thankful that it’s set the course for my entire life and all the music that’s followed, as the band continues to live on into the 21st century”, says Andy Powell.
Wishbone Ash The Vintage Years 1970-1991 is available for pre-order via PledgeMusic and is strictly limited to just 2500 copies.