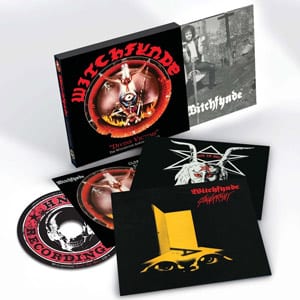 One of the most important NWOBHM bands will play in Greece in January and needless to say that we are bound for a trip down to memory lane. You see, Witchfynde didn’t achieve the commercial success that so rightfully deserved back in the day but the truth is that their first three albums have stood the test of time and they remain a constant reference to every single flashback/article when someone looks back on those early days of NWOBHM.
In the frame of Witchfynde’s upcoming show in Greece, we take a look at a box set that was released a while ago by Cherry Red Records and features the first three albums that the British outfit has delivered in between 1980-1983. Most specifically we are treated with vinyl replica CD reissues of “Give ‘em Hell”, “Stagefright” and “Cloak and Dagger”, a very detailed booklet with many rare and in some cases unreleased photos but the most important extra feature of the box set is the inclusion of a few bonus cuts that are included in the tail end of the tracklist of the regular album. So, this is definitely for all the fans and collectors out there.

Naturally this isn’t a review of those albums…after all, these were issued a long time ago and their artistic value is well-known to every single metal fan out there. Now you get the chance not only to acquire those albums in a cheap price but also to revisit them and see that this band was really ahead of its time. Their lyrical focus on the occult and magic combined with some of the most memorable songs of that era, made Witchfynde one of the best and most identifiable bands of the early 80s. Better management and more luck on their side would have changed history radically.