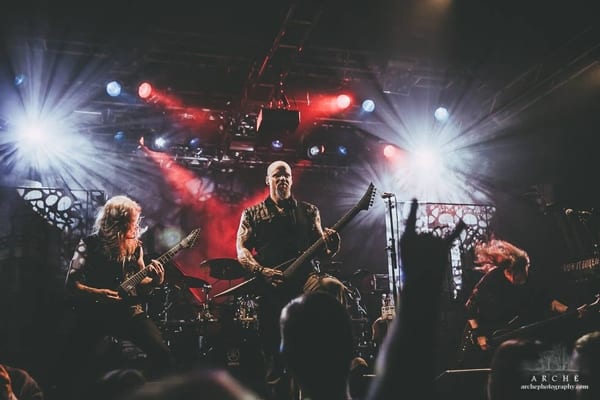 It was a great way to enter the month of September, as Wolfheart visited Greece once again, having developed a special bond with us. It’s the band of the underrated multi-instrumentalist Tuomas Saukkonen, an excellent musician who gave a lot in the melodic death metal scene.

After disbanding all of his active bands (Before The Dawn and Black Sun Aeon the most basic), he created Wolfheart with the purpose of focusing only on them. With them, three local band in an interesting billing.

MODU is a venue that has hosted many live performances so far, but strange enough this was my first time visiting it. A small but cozy place, that if ideal for good communication between the bands and the fans. Fall Of Order opened the night. A new band that plays melodic death/thrash metal. They have many influences, The Haunted and Lamb Of God being some of them, as they covered nicely the second ones by playing the majestic “Walk With Me In Hell”. Nice performance and if they keep working like that maybe they will be heard more in the future.

Mask Of Prospero followed and the night became more interesting. If I had to characterize their music, I would say progressive metalcore. The calm, atmospheric parts of their music were combined perfectly with metalcore attacks. Christos on vocals did a fine job with both the clean and harsh vocals. A difficult musical attempt, but the guys seem to know what they are doing. Very good performance, they have already released an EP and they are about to release their debut album. Something tells me that many ears will listen to them when it will come out.

Last supporting band for the night, AmongRuins who have developed a special relationship with the headliners, as Tuomas Saukkonen produced their very good second album “No Light”. The melodic death metallers gave a brutal show, with Alex Flouros (SL Theory, ex-Fragile Vastness) as their new guitarist, as they had many fans in the venue with constant interactions between them. They invited on stage Christos of Mask Of Prospero for one song but the surprise was then Christianna of Elysion joined them to play “Deadsong” of the mighty Before The Dawn.

I have to say that the sound was very good throughout the night, something that didn’t change with the headliners. With three fantastic records already released, they didn’t have any issue to destroy the stage by playing one great song after the other. In this point, I think I have to mention that Tuomas Saukkonen was all the time in the audience watching the other bands play. He talked with the fans, took pictured with them and was very friendly giving a different image to all. But the awesome part was when he gave his guitar to George Thanasoglou (Fragile Vastness, Orion’s Reign, ex-AmongRuins) and the microphone to Sverd of AmongRuins, showing the good relations between the two bands and of course how special he is as a person and musician.

In general, it was a great night with excellent music from bands that gave their best on stage in one of the best small venues in Athens. For as long as we experience shows like that, we don’t need anything else.