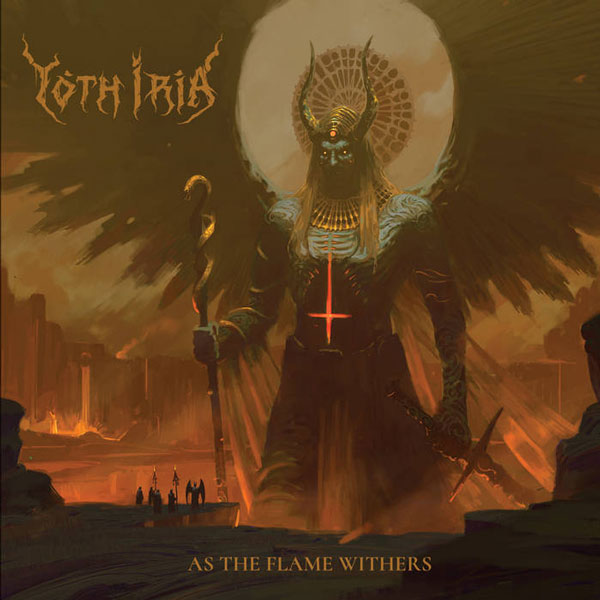 The return of the greatest ones. Something we have been waiting for years, not knowing if it will come true. But you know what they say: better late than never. Yoth Iria impress and how could they not, when at their core are two such important members of the global (yes, global) black metal scene, two musicians who coexisted many years ago in the majestic Rotting Christ.

We are talking about Dimitris Patsouris a.k.a. Jim Mutilator, founder, bassist and lyricist of the band until 1996 (although he continued to write lyrics for them until 1999) and of course a founding member of Varathron. And George Zacharopoulos a.k.a. The Magus, founder of Necromantia, Thou Art Lord and Principality Of Hell among others, as well as a member of Rotting Christ during 1991-1995.

The beginning was made with last year’s EP “Under His Sway”, a very good appetizer. And finally, the first full-length is ready. In these two releases, the rest of the musicians belong to the…family. Dimitris’ brother, John, on the keyboards. George Emmanuel (Lucifer’s Child, ex-Rotting Christ) on guitars and Giannis Votsis a.k.a. J. V. Maelstrom (Thou Art Lord, ex-Principality Of Hell etc.) on drums. Their genre? Hellenic black metal, of course.

That is, this immediately recognizable and characteristic style of Greece. Here we will find mid-tempo songs mainly, keyboards that build a great atmosphere, a few chants, black-as-the-blackest-night vocals by The Magus and guitar work by Emmanuel that makes the difference. All the right ingredients of this sound, played and built in such a way that has your attention from the first to the last seconds.

Songs that immediately stand out, are the opener “The Great Hunter” that starts aggressively with excellent black metal riffing to continue in a doomy rhythm with a riveting atmosphere before closing as it started, the mid-tempo self-titled with the amazing refrain and the incredible guitar melody that sticks to your mind, while the big surprise is “The Red Crown Turns Black”, that had first appeared in the split with Kawir. An up-tempo song with an excellent Maiden-like (oh, yes) melody on the guitar that makes it even more epic.

Yoth Iria (named after a lyric on Rotting Christ’s “The Fourth Knight Of Revelation”) have done a terrific job. “As The Flame Withers” honors the Greek black metal sound of the 90s (with some classic heavy touches) and contrary to its title, the flame inside them does not wither but burns bright. Of course, Emmanuel has a big share in this, who took over production/mixing/mastering with an ideal result. Great record and a triumphant return of Mutilator in something of his own.