Amorphis decided to visit us for a second time in two years and since Rockpages.gr doesn’t lose such an opportunity, invaded into the backstage of Gagarin 205, on the 14th of December 2003 and interrogated the axe man and main composer of the Finnish. Esa Holopainen turned to be a nice guy and being in good mood he talked to us about everything.

Rockpages.gr: Esa, how is the tour going?
Esa: Pretty well.
Rockpages.gr: The last stop of the tour is Greece. Are there going to be any special surprises tonight?
Esa: We’ll play something from the first album as well so I think it’s gonna be a nice surprise. 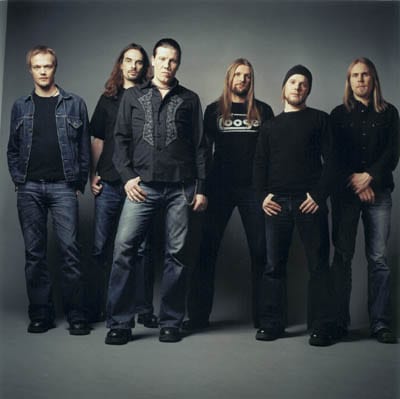 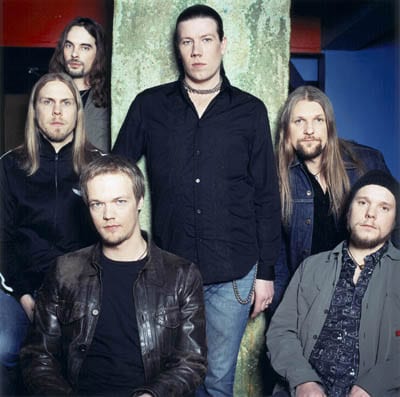 Esa: Well, I think that when we started to record Far From The Sun, we realized that it is definitely an album that we wanted to do by ourselves and produce by ourselves and we did not have a record company to support us…
Rockpages.gr: You didn’t want to have any problems with Virgin, like that they were trying to tell you how to make the album?
Esa: No, no, one of the things we wanted to make sure before we sign was to have the artistic freedom to make whatever we want.
Rockpages.gr: Most of your lyrics are influenced by your national saga, Kalevala. Is Kalevala so important for you and have you ever thought that people may blame you as nationalists?… Of course, you had also the antinazi symbol in My Kantele EP.
Esa: We did that because when we had released Tales From The Thousand Lakes, the album was on the top list of the Finnish skinheads magazine and we wanted to make our statement that we are not Nazis.
Rockpages.gr: There are many skinheads in Finland, as I know…
Esa: Yes there are, but it’s not so bad as it used to be. I think the problem was bigger ten years ago…
Rockpages.gr: Many of your music influences are oriental. How can this match with a northern based lyrical subject?
Esa: Mmm… Taking oriental influences has becοme from progressive bands. We really like a band called Kingston Wall. It doesn’t exist any more…
Rockpages.gr: You had done a cover of them in And I hear you call, right?
Esa: That’s right!… They were a Finnish band and they had oriental elements in their music.
Rockpages.gr: And now a strange question. If there is a music compass, I think that you represent the three sides. North is for the lyrics, Kalevala, west is for the Rock’n’roll elements, the main trunk of your music, and east for the oriental influences. Where is the south? Are you planning for any southern influences like African percussion in the near future?
Esa: Actually we have that! African percussions… The drummer plays percussion too. Ok, not the traditional ones…
Rockpages.gr: I’m asking you because I consider of you as an open minded band.
Esa: Perhaps… Good idea.
Rockpages.gr: In your discography you have 3 covers (Levitation by Hawkwind, Light my fire by The Doors and I hear you call by Kingston Wall). Are there going to be any other covers in the near future? Which song would you like personally to record?
Esa: Mmmmm… Hard to say… We had been talking for a long time, for many many years, for the possibility to record Pink Floyd’s One of these days…It would be nice to do that.
Rockpages.gr: Is there any artist, dead or alive, that would you like to work with?
Esa: Ummm….
Rockpages.gr: Who is your favorite artist?
Esa: I would like to have David Gilmour produce one album for us… Gilmour has done some great things as a producer…
Rockpages.gr: Recently I have read in an interview of Murder Squad that you Finnish people are always drunk and carry a knife. Being drunk is good, but carrying a knife is weird. And Finland is a country with low criminality as I know. Is it a tradition? Are you carrying a knife now?
Esa: It’s not actually true. But it’s used to be that way some years ago. Finnish people used to carry knifes.
Rockpages.gr: I guess not to protect their lives but as a part of their clothing, isn’t it?
Esa: Yes.
Rockpages.gr: So you are not going to stab us tonight?
Esa: No, no hahahaha!
Rockpages.gr: A new album in mind?
Esa: In mind, yes. Hopefully within next year we will be in the studio… We will see. It depends from the tour also…
Rockpages.gr: Last words and a wish for the tonight show, please.
Esa: Thanks for the interview and we will see what is going to happen.