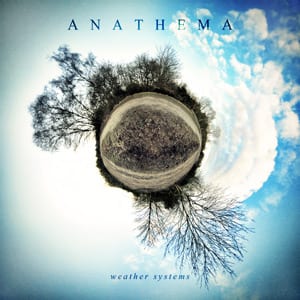 The Cavanagh brothers are back! It might have been only two years after their last release, but “We’re Here Because We’re Here” was not enough to quench your thirst after the 8 year break since “A Natural Disaster”.  “We’re Here Because We’re Here” was a pretty decent album but the lot of post rock influences and the general “happiness” did not match the tastes of some of the fans.
With “Weather Systems” the 4 men and 1 woman from England return to please every fan and easily create new ones.  It has all of the elements from classic records like “Alternative 4” and “Judgment” with great melancholic atmospheres, heavy breaks and rhythm changes and of course some elements that point the future of the band. Lots of classical guitars, piano and the female vocals playing a much greater role.
The album starts with “Untouchable”, a two part song which starts with a classical guitar riff. It is a really fast paced song (for Anathema’s standards) with Vincent sounding really good. The Second part of the song is more like a slow ballad with Miss Lee Douglas making her appearance.
The next two songs are really instant classics in my opinion. “The Gathering of the Clouds” builds up steadily with some great vocal arrangements. And at the moment you think all hell is going to break lose, the next track “Lightning Song” comes in with the astonishing voice of Miss Douglas filling the song with emotion.  And there is also one of the best breaks for an electric guitar I have heard in a long time.
“Sunlight” comes next and sounds like a filler song. Really slow, with the guitars and piano creating a melancholic atmosphere.  The 9 minute “The Storm Before the Calm” starts with a popish electro beat but then it evolves to a great song with heavy parts and slow ballady stuff.  “The beginning and the End” is the most likely to be a single and reminds a lot of old heavier Anathema. “The Lost Child” reminded me a lot of “One Last goodbye” from “Judgment” which can only be good news.
The album ends with the melancholic “Internal Landscapes”. It is a song about near death experiences and it starts with a man describing how he came really close to the edge of dying.
After very long time I can say that Anathema created an album which will please every fan. Atmospheric, melancholic and even heavy at some points. And I might add that the addition of Lee Douglas as a permanent member gave the band another thing to experiment with.