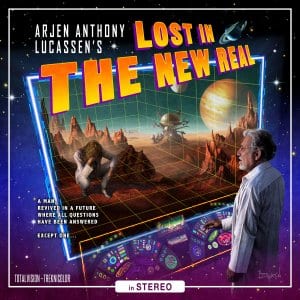 If you are a music fan and live on the planet earth you must have hear something that Arjen Lucassen has written. He is the brains behind Ayreon, Star One, Guilt Machine and a bunch of other bands/projects I haven’t heard of. After years of making music with his projects he saw the time fit to create his first solo album entitled “Lost in the New Real”.
As mister Lucassen is accustomed this is a concept album which tells the story of a man being cryopreserved after being diagnosed with a terminal disease. He’s being revived after a couple hundred years and finds himself in a totally different world that he has to adapt to. A psychological advisor is appointed to him to help him adapt to the new world. The advisor plays the role of the narrator in this album and he is voiced by actor Rutger Hauer who played in Bladerunner and is an idol of Arjen. His voice is just amazing! He gives the whole album a special atmosphere just by talking.
Musically in the two disc album we hear lots of great music. A mix of progressive melodic rock, which we usually hear from the Dutchman, with many classical influences like Zeppelin, Floyd and Rainbow and generally bands he listened to when he was growing up. Songs like “Pink Beatles in a Purple Zeppelin” and the 5 covers from artists like “Led Zeppelin”, “Pink Floyd” and “Frank Zappa” make the 60s and 70s influences apparent.
Both CDs run for one and a half hours which is not very long. Mister Lucassen is great in writing catchy melodies. Every song is built around these catchy melodies with great choruses and at times quite heavy. “Lost in the New Real” is a real progressive masterpiece from a great mind in the modern music industry.