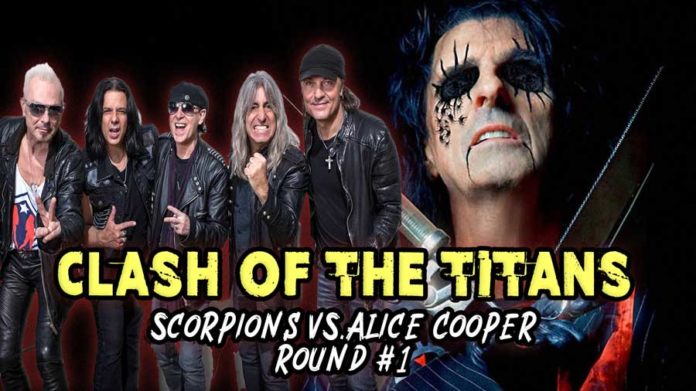 In the wake of the upcoming Scorpions & Alice Cooper show in Greece, we turn back the hands of time to remember and compare -just for the sheer fun of the whole thing- two classic albums by the two legendary artists. This is a celebration of two milestones in the hard rock genre…let’s check ‘em out, shall we?

“Trash”: “I owe the rebirth of my career to Desmond Child”, Alice confessed to us almost 20 years ago when we did a face to face interview with him. Just between you and me, we couldn’t agree more as it’s not an exaggeration if we underline that an entire generation got to know Prince of Darkness and as a matter of fact there were many who thought that “Trash” was his debut album! Perfect compositional quality, a crystal clear production, sensational videos, legendary special guests…what more can someone ask, really! The fact that on this album we are treated with “Poison” and “Bed of Nails” (just to name two classics) says it all. This is an album that spoke straight to the heart of every hard rocker back then…

“Savage Amusement:” When Dieter Dierks decided to follow the path of Mutt Lange, he took it one step further thus the mighty Scorpions had a 4-year gap between studio releases; something quite unusual in the 80s (unless you were Def Leppard or something). The amazing thing was that Scorpions, despite the polished production, managed not only to retain their trademark sound but also add more sonic weapons to their arsenal. For example, the backing vocals were flawless and suitable for the FM radio and MTV…not that Scorpions had any problem whatsoever as they had conquered USA and Europe with their timeless “Love At First Sting”. Yet “Savage Amusement” was both an artistic and commercial success. Personally, it’s on my Top 3 records of Scorpions while I have a few friends who consider it to be their best album…ever! We won’t argue with that!