Not just another concert, this was a theatrical ritual, with exceptional musicians, a night full of theatricality and ancient greek music organs where the Bacchic invocations met with Dionysian excitement and the greek traditional music. 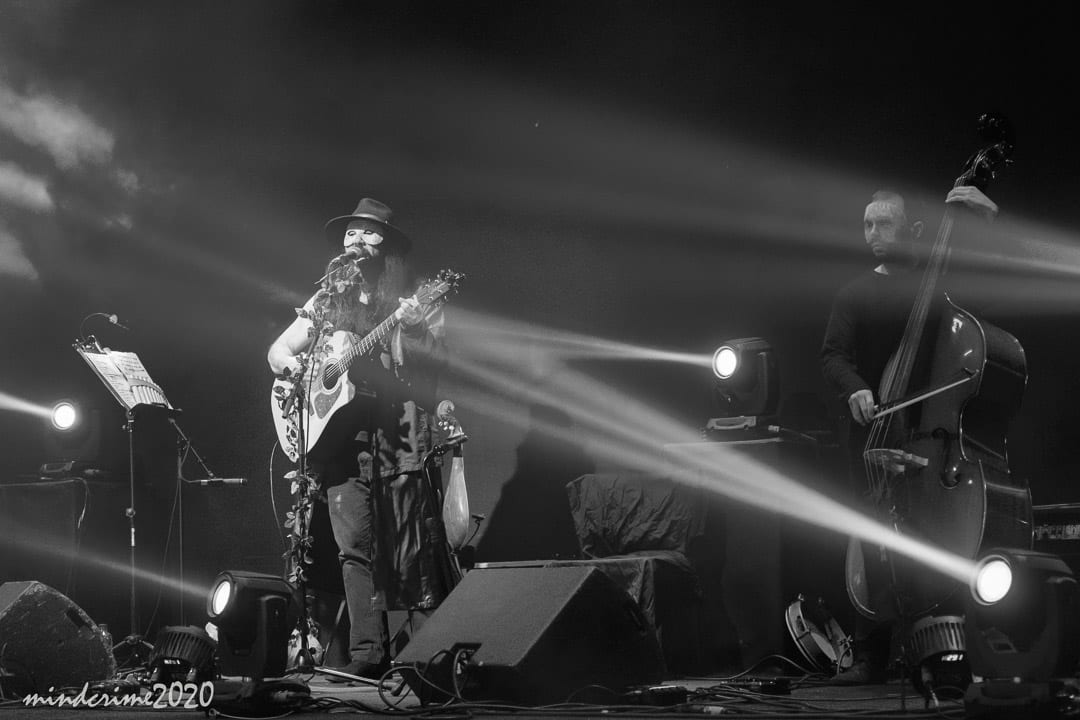 “I am ready to accept your oracle / deep dark surrounds me”

Music, the art of the arts, the art that has its origins in the mists of time and is able to refresh the soul of humans, to bring back memories and travel you away, to another spiritual dimension.
We’ve heard about DAEMONIA NYMPHE 20 years ago when Metal Invader magazine included some of their tracks in a compilation along with some great reviews for their music. Metalheads were really surprised back then reading about a group that used music instruments from Ancient Greece (until then we knew only Fiendish Nymph, a black metal band formed by Giasafakis brothers, which was in a way the early form of Daemonia Nymphe before they were dedicated fully on their unique neofolk/pagan style). Since then a lot have happened, the band left the small underground circle, they have released some amazing albums, they have created music for theatre, they have played in big music festivals etc Last year we saw them in Athens (at Gagarin club) for the first time after 11 years and now, a year later they decided to return in a bigger venue (Piraeus Academy). 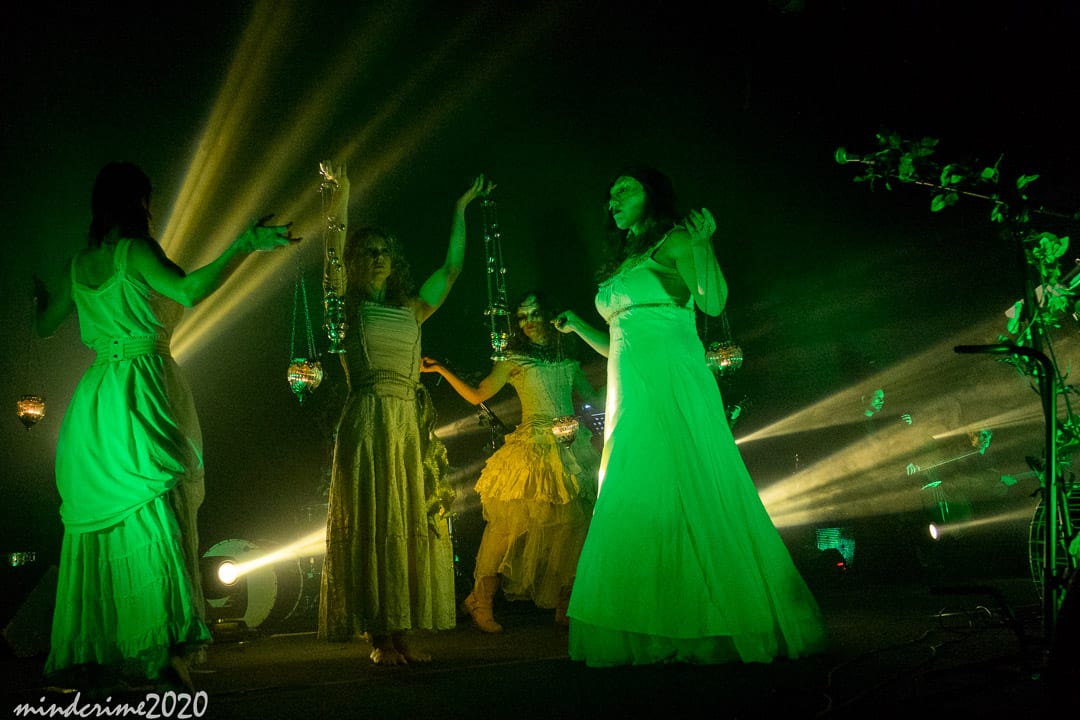 “Oh Earth goddess, mother of the blessed, and of mortal humans”

I was 100% sure that this is gonna be a special concert anyway but they managed to overcome their last one! It seems a lot of work had been done on every level: great sound, proper lights and stage setting since on stage there were numerous musicians along with other performers that led to a magnificent final result. In front of us was one of the principal members of the band, Evi Stergiou (vocals and many different organs like ancient lyre, pandura, classic guitar, percussions) while the other principal member, Spyros Giasafakis was at the back side (vocals, classic guitar and again numerous weird organs like ancient lyre, Pan’s aulos, ancient guitar, pandura, askavlos(bagpipes) and sistrum). Evi was accompanied by two great voices (Victoria Couper and Rey Yusuf) while at the back side were Thodoris Ziarkas (cretan lyre, double bass), Prodromos Mystakidis (drums), Gizem Altinordu (percussions), Orestis Giasafakis (double bass, classic guitar). 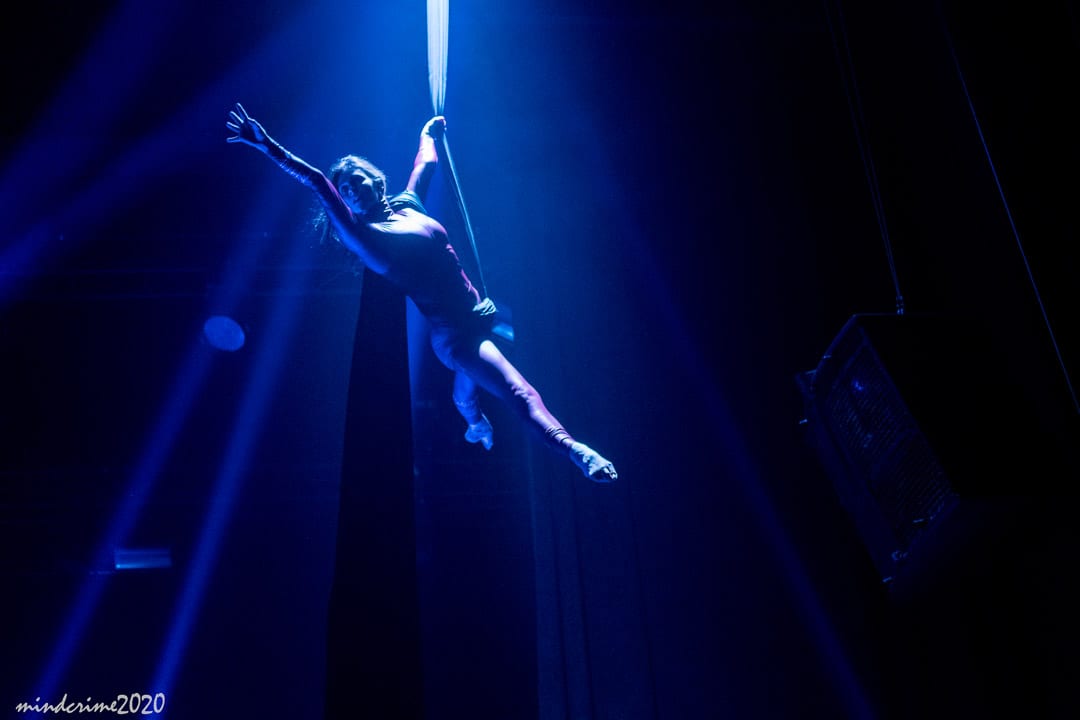 “I Call strong Pan, the substance of the whole”

We noticed quickly how special this concert was as the Bacchic invocations accompanied by slow dancing and the smoke while the shadows on the wall fitted nicely with something that looked like a theatrical ritual. We’ve heard compositions that covered most of their albums and it was a nice surprise by them to play after many years “Invoking the Pan” from their first album. At first, the audience didn’t know what to focus and stared mesmerized the weird instruments or the dancers’ performance, Sile Gutrod and Ioanna Douka were great, especially the air dance by Ioanna isn’t something that we are used to see often in concert venues. All these wouldn’t make any sense though (apart from impression) if they didn’t coexist with the equivalent song, like for example at “Orphic Hymn To The Moon” when the dancer was hanging from moon’s crown, the white veil that covered the stage during “Aspri Varkoula” with the dark lyrics at the background, the masks during “Nemesis Rhamnousia” and so many others. 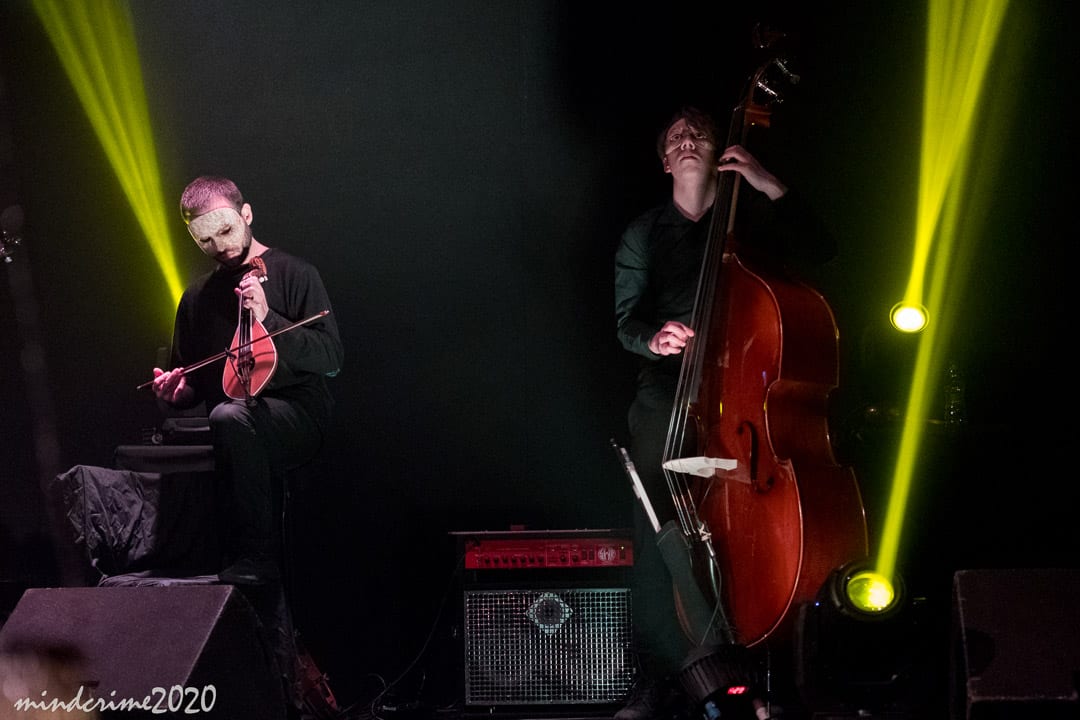 As I already said this was a great performance by the band, even those few that seemed to get bored (or maybe not familiar enough with the band’s music) cheered up with the homonym track of “Psychostasia” album that then led to a nice fusion of Dionysian festival along with up tempo rhythms from greek traditional music followed by “Thracian Gaia”, the lyre at “Dance of the Satyrs” and then the standing ovation when we heard the bagpipes from Spyros. It was a trip from the mountains of Crete to those of Epirus and from there to Thrace while at the end the drums and percussions brought back something ancient, beyond time, something like the rhythm that led the primitive humans  to beat stones and cymbals in an attempt to coordinate the inner and outer world. The encore was magical too with people smiling for gaining so much these two hours. 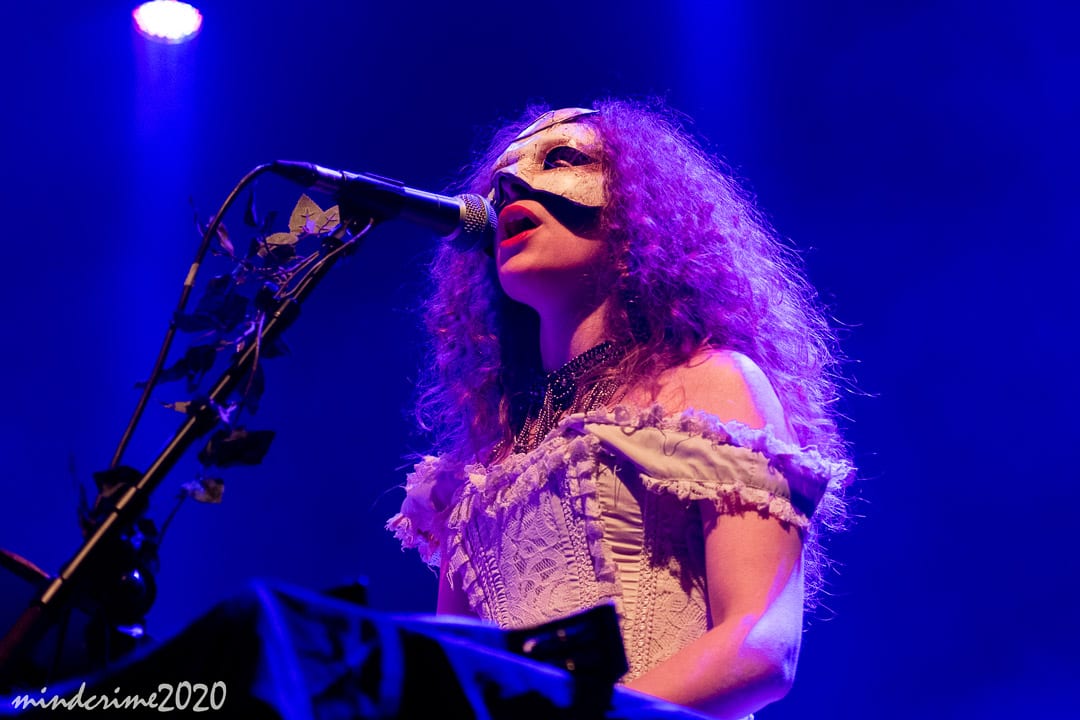