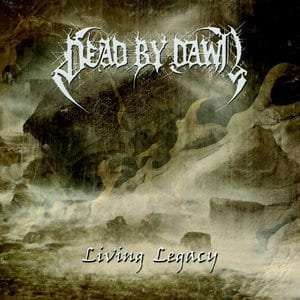 “Dead by Dawn” are a band coming from Athens and their members are, Stergios “Cernunnos” on vocals, Alex K. on drums and the man who is, musically, behind everything in the band, Ilias “Xardas”. On this first album, the bass is handled by Nick Tsianos and the keyboard parts are credited to Myrto (Other data Unkown).

Their sound moves in the extreme “Death Metal” genre and they are from the bands that do it well.
The style is as aggressive as it should be, the black vocals are excellent and the lead guitar parts are at points brilliant.

The only problem I find with the release, is the production of the album. In the beginning I thought that the production was great because it gives the album a primitive feeling. But as time passed, and in conjunction with some more modest tracks, my ear got tired.

Just because some parts of the lead guitar are excellent, I would really like to hear how the band would sound with a better production.

Of the 11 tracks on the “Living Legacy” I can easily distinguish the “Constant Reminders” and “Necrophania (part 2)”. Where is the first part of “Necrophania” since it doesn’t exist neither in the album nor in the EP that was released in 2003 is a question I can’t answer.

Good first release by “Dead by Dawn” that deserve the attention of the fans of the genre.