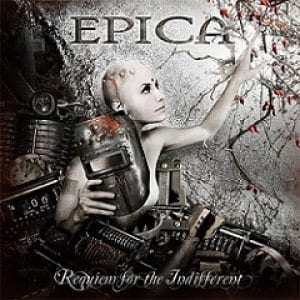 Every new Epica album makes me really glad. From the first moment they have started, the Dutch show that, apart from their given talent, they follow a steadily ascending course and a professional way of thinking which certifies that their next step will also be a step up.
Sound of the band is dominating symphonic here as well, giving credits to those who believed that their previous, “Design Your Universe”, was pointing to, let’s say, a new direction. “Requiem For The Indifferent” is here now to show more sides of Epica’s talent and potential. Technical elements (I can not call them progressive though) are more obvious than ever; they so elegantly unite with those forwarding to death sounds. Melodies are exceptional, we have nothing new in this sector, however, such a thing might not be needed, as these melodies are mainly responsible for putting the band where it is for almost a decade now. Simone is the one responsible for their quality as well as their performance. Her voice breathes so much competence yet a lot of feeling, too. Apart from her unquestionable assets, brutal vocals on the album are once again necessary in order to cover the very special Epica musical needs, as they are now more complicated than they ever were before.
We are located at this period where female fronted metal is not leading one of its best times. Perhaps it’s a matter of overwhelming the inspiration, perhaps it was drained out… from above. Good bands remaining are only a few and that was expected. Epica and “Requiem For The Indifferent” convince us that fans can look forward to good projects indeed and that… Requiem is not referring to their beloved music.