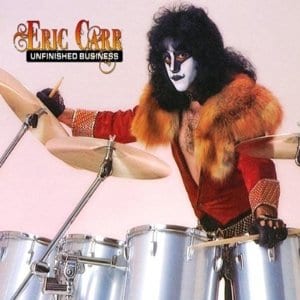 The 24th of November marks the 20th anniversary since the ultimate passing of KISS’ second drummer, Eric Carr. His family, friends and fellow musicians who were influenced by his music and overall presence have tried all these years to keep Carr’s memory alive. Back in the late 90s, a collection of rare and unreleased songs was issued called “Rockology”. Now, Loretta Caravello (Eric’s sister) handles and supervises “Unfinished Business” which in some ways is the companion to the aforementioned first collection.
“Unfinished Business” features some special guests like Ted Poley, AJ Pero, Kee Marchello and others that enriches the quality and the performance on the tracks of the album. As you can probably gather, this is a release mainly forwarded towards the KISS fans.
So why should someone buy this c.d.? Well, actually, I can give you four reasons. First of all, we find in there 3 unreleased songs that haven’t been leaked in the internet and the bootleg circuit. I am referring to “Troubles Inside You” (an excellent song that kinda reminded me of Peter Criss’ “Let Me Rock You” atmosphere), “Dial L For Love” (an instrumental 1987 composition) and “Midnite Stranger” (a mid-80s tune that fell in the hands of another late ex-KISS member, Mark St. John). Secondly, there are two songs in their complete form now. I am talking about “Just Can’t Wait” which was previously available as an instrumental and “Elephant Man” for which Eric had only written lyrics. Both tracks have been completed by the guest musicians. The third reason is that we get to have on an official Eric Carr release –although it was widely available in bootleg form since 2007- his rendition of “Shandi” as he sang it back in 1980 for the KISS audition. Last but certainly not least, one should buy this album in order to pay tribute to a great musician and a gentle, kind soul who left this world too early (at the same day as Freddie Mercury).
Although the quality of the majority of the songs is not an ideal one (after all, these are mostly demo tapes), many congratulations should go to Mrs Caravello for her tireless efforts.
Highlight: Truth must be told here; Paul Stanley and Gene Simmons should have done more things so as to keep Eric Carr’s memory alive…