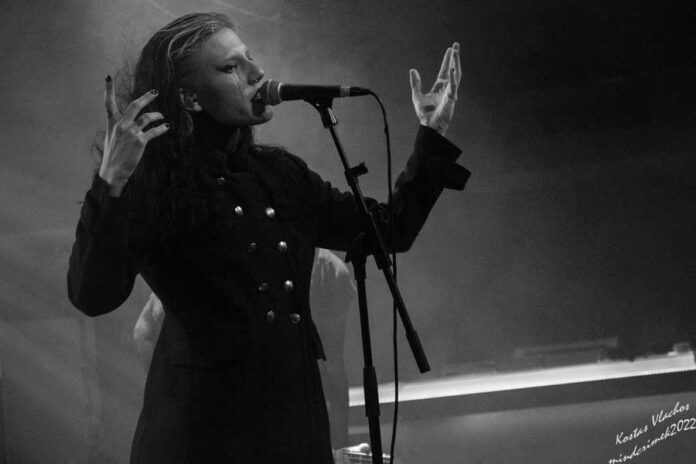 “Empty within / empty without…”

The first Friday of December found Athens with cold temperatures so I couldn’t think something better than an extreme live of three Greek bands. EUPHROSYNE were the healiners on a night that they presented their recent debut EP “Keres” that has already attract many lights on the band. The support acts were KIVA, a new band that surprised me with their performance and MASS CULTURE, a band that I knew they are great on stage, this time with some great new songs.

As we gradually enter winter it’s not easy to drink beers with friends outside the venues after sunset, so, the door s opening brough much relief and right on 21:00 the first band was ready to kick off. I guess most of the people didn’t know much about KIVA since they haven’t release something officially yet apart from an epic video single on their YouTube channel. One thing is for sure though, KIVA are ready to bring something epic soon and their opening track “In Silence” showed us the way, a song full of tension through out its ten minutes length. Yes, this band doesn’t write “easy to listen” music, instead they try to create a weird dark atmosphere that drugs you down slowly with their post/sludge style that brings to mind bands like Amenra and Cult Of Luna. Before we calm down they played “From The Ego Of Our Ancestors” (the only song we knew before they hit the stage), a song that easily won the attention of everyone in the venue with its sneaky melody at the beginning before the drums of Stefanos start beating after two minutes and the clean whispering vocals of Dimitris turn into some impressive yelling growls. It’s  amazing what the do through out this nine minute long track and how they alternate non stop rhythm and emotions. So, it was no surprise that the third (still untitled) track was also long, I’m pretty sure an epic album is on the way from this band (it’s in pro-production stage at the moment), don’t forget that all the members are experienced members of other bands (Allochiria, Spacement, Amniac, Mind Ripple). The decided to close their 35 minute long set with a shorter track, again an untitled one, that its rolling drumming caught my attention. Instinctively I went to the merchandise corner although I knew they don’t have any cd or vinyl to sell but the beautiful black and white t-shirts partially filled the gap and show how some bands pay attention on the artwork too.

The second band on stage was MASS CULTURE. They kicked off at 22:20 and for forty minutes they conquered the stage as they were fully dedicated on their show. Post metal covered with raw sludge, screamy torn vocals and a beast behind the drum kit that was so powerful that almost felt from his kit on the last hit! We had already caught them live in may when they opened for Russian Circles but also most recently here on the same venue. So it was no surprise how compact they sound and how direct and into your face is their music with almost a hardcore attitude behind.

It’s been already four years since the release of the great “Primal | Ephemeral” album so many songs on their setlist this time were from their upcoming new album. But they were so passionate on stage that all the new tracks blended nicely with the old ones.

“running away seems so hard…”

Then there was an unnecessary boring 30 minute long break, a bad habit in many concerts in Greece that organizers have to stop sometime since many people avoid some gigs because they is no public transport after midnight and they don’t want to use a taxi to return back home.

So, at 23:30 EUPHROSYNE were ready to hit the stage. It’s a new band that released two singles in 2021 and recently the great debut EP “Keres”. This concert was actually the official release show for them but they changed the track order to give more variety to the night but of course they also added other songs like the two singles before the EP.

At first there were some issues with the sound with some strange ups and downs and the almost buried main mic but hopefully the problem got fixed quickly otherwise it would be a pity to miss Efi’s great performance because she is a singer that has a singing style that adjusts accordingly to the emotion she wants to express (pain, anger, desperation etc) so she changes from whispering to clean or brutal vocals. Euphrosyne’s can be put under many different music genres but I think atmospheric post black metal describes enough what they are doing since from one side they are based on an almost gothic minimal style with unique orchestral passages and then they go into some outbursts that are not the typical of a black metal band but reminds me more of great bands like Gojira. Alex Despotidis is great on guitar (he’s also the composer and Evi’s alter ego since they created the project together) but also Kostas Mamalis (drums) and George Gazis (bass) that we saw earlier playing the bass with Kiva band.