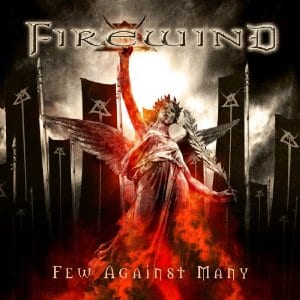 Firewind change their direction towards progressive metal, more than ever before, while they seem to steer away from their characteristic element of the past, that was the immediate and catchy melodies. The compositions become more complex on their majority, while they feel like experimenting and invite Apocalyptica to participate on one song. The band’s seventh album is the one that will need the most listening than any of the previous ones.
Surely, challenging yourself and trying to do something different is something positive by itself, especially in fine arts, where it shows a restless, unsatisfied and creative spirit. Of course, even that is impossible to satisfy every addressee. So, I am going to stand my ground and declare that I don’t quite like this evolution on Firewind’s sound. I believe that the prog style of “Few Against Money” doesn’t suit them, as much as the mellow-er direction up until “Days Of Defiance”.
What’s undoubted though is the amazing performance from Apollo on vocals, that is rich and prevailing as it’s supposed to be by a metal performer. From the heaviest moments to the breathtaking “Edge Of A Dream” where he is accompanied by Apocalyptica’s cellos, and Gus’s guitar he is truly amazing. Not that the others are lacking though… Bob Katsionis is all over the place with his keyboards, and I bet that he contributed on guitars as well. Petros Christo is as solid as a rock on bass, while the new-comer Johan Nunez on drums sounds like he is turbo charged. Gus on the other hand delivers his pure talent on the six-string.
So, personally I’d say that “Edge Of A Dream” stands out for being different, “Losing My Mind”, and “Glorious” for trying to bridge the melodic approach with the prog one, and “Destiny”, as well as “Undying Fire” for reminding us the previous albums that established the band’s name. I hope that they will return to the style that became their trademark, or if they continue under the progressive banner to embrace their melodic and catchier side more on the next album.