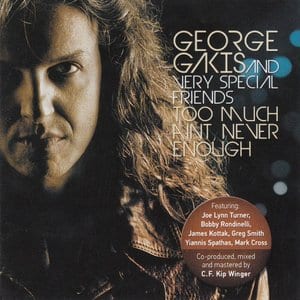 One of the most popular figures in the national Greek rock scene, George Gakis, returns with a new album after being absent for almost ten years, with his usual backing band, the Troublemakers, and an impressive cast of guest lists.
First of all, the album is a several levels higher than anything else coming from George. The production, that was overlooked by Kip Winger –read the interview- is superb, crystal clear, and powerful making every song sound great. Troublemakers’ playing touches perfection, while Nikos Zouros guitars are ideal for an album like that. As you already might have read the album contains the special appearance of Mark Cross, Joe Lynn Turner on a duet with George (“Street Of Broken Dreams”), Greg Smith and Bobby Rondinelli, James Kottak, and Yiannis Spathas in a song that pays tribute to the Epirus folklore and tradition.
The compositions are very good with “Days Of Rock’n’Roll”, and “Fame” standing out at once, while one more very important thing is the structure of the album, and the balance between the two ballads (far fewer than in “Forbidden Paradise”) and the rocker songs.
Having accumulated a more personal relationship with the music and songs of George Gakis, having listened to the albums countless times, and having attended numerous gigs, I cannot hide my joy when I see a Greek artist with dreams, creativity, and imagination accomplishing his visions from playing in Vassilis Papakonstantinou band, appearing on national Greek TV in the ‘90s, and releasing an album through an international label. My wish, and hope is that he has more success in the future, which we are going to share, and feel proud!