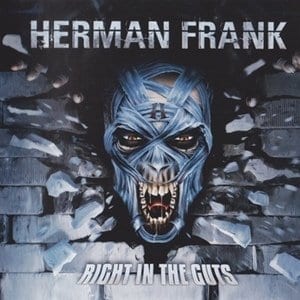 Herman Frank proves to be a force to be reckoned with when it comes down to his pure solo records. I remember, three years ago, that the debut album by the Accept axeman had left me under the best of impressions. Frank’s newest offering is equally good (if not superior) and it simply comes to do justice to all those who believe that the veteran musicians can’t do wrong because heavy metal runs in their blood…it’s like a second nature to them!
One should expect groundbreaking musical patterns here…what we get is teutonic, traditional heavy metal with clear influences by Accept and Victory. The guitars with their catchy and powerful riffs are predominant throughout the album while the singer Rick Altzi (best known for his tenure with At Vance) does a hell of a job! At moments, he reminded me of Firewind’s Apollo Papathanasio. All in all, I’d say that in combination with Accept’s “Stalingrad”, Herman Frank’s “Right In The Guts” offers the ideal menu for all the fans of traditional heavy metal who don’t seek for American-fused musical styles.
Highlight: The other guitarist in the band isof Greek origin and his name is Christos Mamalitsidis.