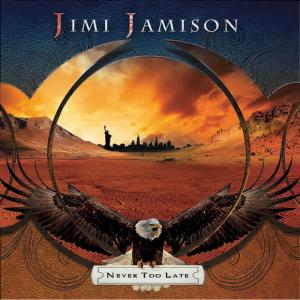 There are some singers that when it comes the time to release brand new material, they have some undisputed advantages that –in some way- make you retain a quite favorable attitude towards the new songs. One of these advantages could be the fact that they have a long and illustrious career behind them. Another one might be that they have a unique and instantly recognizable voice. Jimi Jamison possess those assets and for this writer, Jamison belongs to the top of his list of his favorite performers (together with Steve Perry).
“Never Too Late” is yet another one of Jamison’s solo endeavors and once again it doesn’t only takes by storm by the sheer quality of the compositions but it also proves that it’s almost certain that the veteran singers in the music circuit will always find a way to deliver sensational tunes. This record is actually a…two-men show. On one hand we have the flawless performance by Jimi Jamison and on the other one we get Erik Martensson’s undeniable talent when it comes down to the compositions themselves.
With an overall album atmosphere that reminds at moments Journey (of the “Revelation” era) and Survivor (naturally) of the first couple of records with Jamison behind the mic, “Never Too Late” lays the foundation of being the AOR album of 2012!
Highlight: Don’t forget that we are also expecting the new Survivor album, even without the great Jim Peterik in the current line-up.