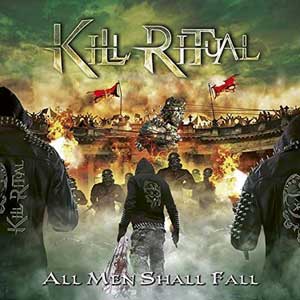 The band Kill Ritual comes from California’s San Jose and plays power and thrash metal as it happens in the wider area. Their origin it’s important because it marks the sound of the 1980s and features many elements from bay area bands such as Forbidden and Evil Dead. “All Men Will Fall”, which is their fourth full length album, contains more classic American power metal and less thrash elements. The voice reminds me of someone of the deep 80s but I still did not find who he is. However, the vocals are distinguished from the aggressiveness of the idiom without being permanently aggressive and also by purity. The tracks are easy to listen to with loud riffs, melodies and good solos. From songs, the “megalomaniac”, “A Re-Imagining”, which is also a great track “Lies”, stand out. In conclusion, I would say that it is an album that is generally dignified and can be heard quite easily, with a tendency to more power metal, but it does not have so remarkable compositions. It’s not the album that will take our minds.

PS: I finally could not remember with which vocals they look like.