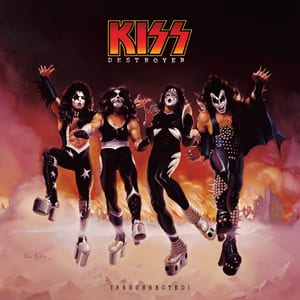 Many years ago, ex-KISS collaborator, Sean Delaney, stated that when he handled the remixes of some classic KISS tunes for “Double Platinum”, he couldn’t really add anything to the songs that were featured on “Destroyer” and had the signature of the great Bob Ezrin all over them. 36 years and a few months later, the hottest band in the world decides to reissue the album that is considered by many its best work. As a matter of fact, it was Bob Ezrin who brought the idea on the table and naturally he is the one who supervised the digital remastering of this masterpiece. Thus came…the resurrection of “Destroyer”.
I was kinda curious to see what Ezrin would come up with in order to refresh the overall crystal sound of “Destroyer”. Believe me when I’m saying, the album sounds even better! It may sound pompous but it’s the truth! The die hard fans of the band will definitely notice a few tiny yet substantial changes and additions in such songs as “Detroit Rock City”, “King of the Night Time World”, “God of Thunder” and “Beth”. They will, also, dig the alternate guitar solo of “Sweet Pain” and of course Ken Kelly’s first artwork. As for the rest of the potential listeners, well…they will surely enjoy a crystal clear and imposing “Destroyer”!
If KISS had added a few bonus tracks, then we would have been far more satisfied…after all, there are many unreleased songs from that era. Don’t forget, though, that KISS never paid much attention (that is really wrong, from my perspective) to that aspect of their career.
Highlight: Doesn’t Ace look like a duck on that first cover?