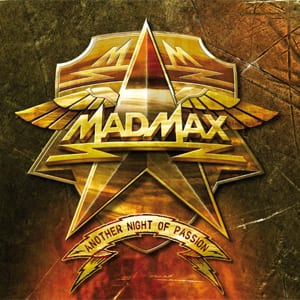 When I first found out that the new Mad Max album would be called “Another Night of Passion”, I thought this could be probably a re-recorded version of the classic 1987 release “Night of Passion”. However this was far from truth, as what we get in our hands is a brand new studio album by the German outfit that refers immediately to the atmosphere of that 80s record and could have easily been its natural successor! The classic line-up is once again completed with the return of drummer Axel Kruse and as you can gather the whole bunch is naturally excellent!
Those of you out there who expect a slow-paced or mid-tempo record with wonderful ballads in there, they are surely in for a big surprise as “Another Night of Passion” is full of pure, uplifting hard rock songs that remind of that “party mood” of those late 80s albums. The verse of the opening track “Rocklahoma” –a tribute to the US Festival of the same name- brings in mind the classic Scorpions’ track “Dynamite”, “Metal Edge” takes you by storm with its bombastic rhythm while my personal favorite “Fallen From Grace” is probably a nod to the latter works by the German quartet.
Voss, Breforth, Bergmann, Kruse prove –not that they were in need of doing so- how capable and brilliant musicians they are but at the same time, almost subconsciously, we can’t help but wondering why Mad Max never achieved its commercial success that they rightfully deserved! But, it’s never too late for someone to discover that awesome band (even after 30 years)…after all, many night of passions are guaranteed with the Mad Max music as the ideal soundtrack!
Highlight: The band will hit the road with Axel Rudi Pell for an excellent package of melodic hard n’ heavy sound.