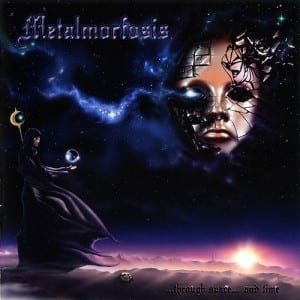 The band from Athens, Greece was actually formed in 1989, as a school band then, with a different name. It’s been a while since then, right? The band changed names and they answer to the one you read above since 2003. The boys had released a 12’’, a 7’’ and a four track CD. This is basically their first full length.
Opening track is called “Spectre”. Electro-acoustic guitars intro, axes in the back, air-sampling… Then an 80’s riff enters, epical and barbaric. Cool! Drums are rolling and the voice is on! Unfortunately, the singer is singing off key, he practically destroyed the song. It’s a pity cuz the solos and themes are quite intriguing.
“Angel on the run” is up next. Another fearsome riff, the song is totally Jag Panzer. It’s a good thing that vocals are decent in this one. When it comes to grain and rough vox, it’s better, when high frequencies are needed, then there is a tendency for off-key, yet I have to listen to the rest of the bunch.
Mid tempo “Haunted house” also possesses a mighty riff. Okay, there is definitely a problem with the vocals. Backing vox tricks can not cover it, I’m referring to that “Come on and stay with me” spot. Solo is powerful, rhythm is powerful, however the drums are suffering due to bad production and sound, paradiddles are messy, it’s like a bad drum programming.
I love their ideas, they are pointing to Accept and, at some point, to Judas Priest… I just need to tell the boys that spent money in making this album the following. Gents, I believe there is a problem with the voice. I do believe there is a problem with the production. As long as vocals are expressed like in “Over the waves” chorus, not a lot of peeps are gonna nag about it. However, when you try high pitch and lyrical parts…