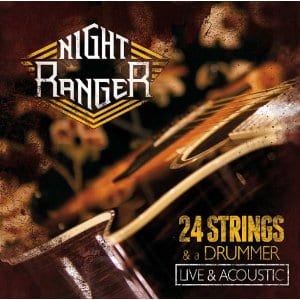 Once Upon A Time, David Coverdale said that when a song is good it doesn’t really matter if you are gonna play it on acoustic or electric guitar. And this might not be true –as we all know – in all circumstances but in the case of Night Ranger’s latest release, Coverdale’s statement finds a perfect match. “24 Strings And A Drummer” is a live album with one striking characteristic: all the songs are performed in their bare form; in pure acoustic style. This is more or less a “best of” package that gives the chance to all the Ranger fans to listen to their favorite songs in a more simple and purer version without the benefit of a full-blown production.
With a set list that is comprised of the finest songs of the band’s illustrious back catalogue (including the brilliant last studio record “Growing Up In California”) and with the magical triplet of Blades/Keagy/Gillis being as always on top form and clearly in high spirits, “24 Strings And A Drummer” is for this writer the best live album out of all the official releases of the band. Well, I might not be the most objective reviewer here but trust me this is a great sample of pure, acoustic rock n’ roll enjoyment!
Some of the highlights include “Don’t Tell Me You Love Me” (surprisingly it sounds as powerful as its electric counterpart), “You Can Still Rock In America” and the cover version of “Boys of Summer” (Don Henley). All in all, this is an awesome period for all the Ranger fans after a sensational studio record, an equally qualitative solo album by Jack Blades and now a special acoustic live release.
Highlight: When I listen to “Sister Christian” almost subconsciously come in mind: a) the first time that I listened to the song back in the 80s, b) the excellent video clip on MTV, c) the musical play of “Rock of Ages”. Three in one package!