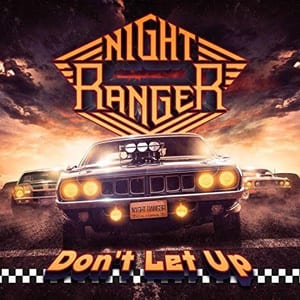 In the past 6-7 years Night Ranger is definitely on a roll by producing highly qualitative records that bear all the trademark elements of their sound; a fact that is definitely evident of a second time-period of an impressive inspiration. “Don’t Let Up” is the band’s third album in a row and the boys are back for the attack once again. This line-up is tight as hell and Night Ranger are having the time of their lives. Naturally, the three founding members (Blades/Gillis/Keagy) are on the spotlight yet Kelli and Levy are doing a great job, as well.
So, after the superb “Somewhere in California” and the equally impressive “High Road”, here comes “Don’t Let Up” to complete this…trilogy of great studio offerings by Night Ranger.

Once again, the Californian quintet delivers the goods and the new album is an instant classic! Right from the sheer listening of the first note, you know that this is a Night Ranger record and you find yourself on yet another journey with them: pure US hard rock sound with guitar driven songs that blow your mind. I guess that’s a fair description of how the new Night Ranger album sounds. The two opening numbers (“Somehow Someway” and “Running Out Of Time”) along with “Jamie” and “Comfort Me” are by far the highlights of the album; especially, “Running Out Of Time” has a riff that Rick Springfield would be so jealous of!

The basic difference of “Don’t Let Up” compared to the previous two studio albums by Night Ranger is that it is more guitar-oriented with Gillis’ guitar leading the festivities and taking no prisoners on its way! From a compositional standpoint, I can’t really point down any significant changes…not that we needed any! All in all, “Don’t Let Up” is yet another remarkable Night Ranger album…the boys from California still got it after 35 years!

Highlight: How about a European tour, boys…?