‘Elpis’, the debut by Prejudice Reborn, was released just a little while ago. First of all, if you are fans of groups like Metallica and Machine Head you have to check them out, and secondly read what Tassos Kanellopoulos (Bass, Vocals) had to say about this album, the next one, the band’ s eventful video shooting for ‘Beautiful Sadness’, as well as Jason Newsted.

Rockpages.gr: Prejudice Reborn have been around for quite some time. Why is your debut coming out now? Did you wait until the material was strong enough?

Tassos Kanellopoulos: Prejudice Reborn exist since 2005. Essentially we spent the first five years going through many lineup changes. I didn’t sing back then, I only played bass. We constantly changed guitarists and singers; as a result we only did one demo in 2008, ‘Weak’. When Manolis (drums) and I finished our time in the army in 2009 we decided to stabilize the lineup and that I would sing. We auditioned for guitarists and found Thodoris and Kostas who have now been in the band for three years.  Additionally, we started composing new songs that we recorded for the ‘Rain Must Fall’ EP. The material was definitely more mature comparing to our first compositions off ‘Weak’. It was a natural progress through time. 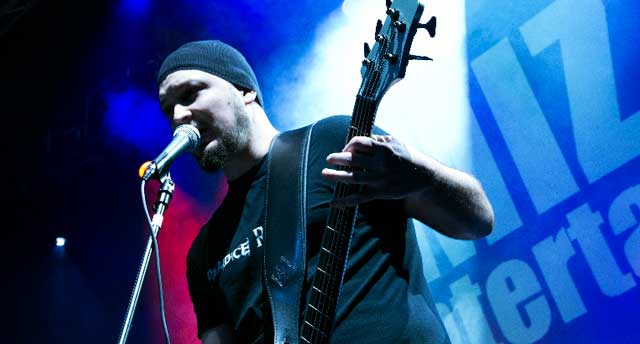 Rockpages.gr : For many fans, heavy metal music gives hope in tough times. Is this one of the meanings behind the title ‘Elpis’? What’s its story?

Tassos Kanellopoulos: ‘Elpis’ is a timely title and was specifically chosen because it can have many interpretations. Our goal is to pass some messages through our music. This is the magic of music and songs; they have a different meaning for each listener. Definitely of the meanings is the one you mentioned. Music and especially metal has the power and the ability to fill you with hope and give you strength.
For us, ‘Elpis’ was the strongest track on the whole record in terms of composition, meaning and structure, so we knew that was going to be the album title. The song is about the legend of Pandora’s Box and how the gods deceived her. The chorus is about the way some specific images fill us with hope and optimism about the future. Each man gets hope from different things so it’s something clearly personal. Thodoris (guitar) had the idea to write a song about hope in general. I loved the idea and it fitted the music we had written.

Rockpages.gr : Where was the album produced and what did you want from its sound? Did you change things compared to the ‘Rain Must Fall’ EP?

Tassos Kanellopoulos: We did the production at Fragile Studios. In general we were really satisfied because we came very close to the sound we wanted. We were looking for a heavy sound, with teeth, that grooves but you can also distinguish every instrument (notably the bass). At the same time it had to highlight the songs and make them sound as fresh as possible. That was one of the reasons the record took so long to mix, because we went for something unique. We changed the songs that were included in the ‘Rain Must Fall’ EP as well. We re-recorded some guitar parts and mixed more carefully. It makes sense since the recorded was recorded in the summer of 2010 and 2011 and we did some final corrections in the autumn of 2012. It’s only natural that in that year in between we evolved as musicians and wanted the best possible result for our debut. 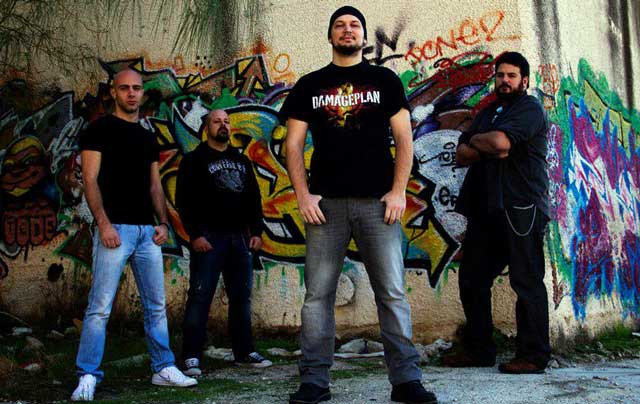 Rockpages.gr : Describe the way you write songs. Do you start with a riff and then add more things? What’s the process?

Tassos Kanellopoulos: Usually all four of us write riffs that we record on video and send to a common folder via dropbox. From there we choose the strongest riffs or some that fit together and build a skeleton which we jam in the studio. If that skeleton gets our approval and feels right, I write a vocal melody which plays a crucial role on how the song will turn up and whether we‘ll keep it in its entirety or just a part of it. The instrumentation and enrichment happens after it is 80% ready.

Rockpages.gr : Let’s talk about the song ‘Beautiful Sadness’ and its video. Although it’s heavy, I consider it catchy enough to widen Prejudice Reborn’s audience.

Tassos Kanellopoulos: ‘Beautiful Sadness’ is indeed a song that is liked even by people who are not metal fans. Maybe it’s because it happened naturally, it wasn’t planned. We’ve never written anything to please someone. We have to like it first, and be enthused by it. ‘Beautiful Sadness’ is the one end of the spectrum for the band if we suppose ‘OCD’ is the other. This is where we are musically. The video for ‘Beautiful Sadness’ was shot by Vagelis Gialamas in November, in a remote beach in Rafina. Although it came out after ‘OCD’, it was shot prior to that. There are a lot of stories behind it and the effort it took was great. First of all, I injured my shoulder during that time. Also, the road that led to the beach was very rough, like a cliff. Kostas almost fell down while carrying our gear during the night, but thankfully Manolis held him. The beach turned out to be for nudists, so even though it was in November, some people enjoyed the sea the way God made them. The sea was cold, so the underwater shots were hard to do and Kostas was freezing. By the way, even though it was some time ago we want to thank all the guys that helped us; without them this video wouldn’t be possible. 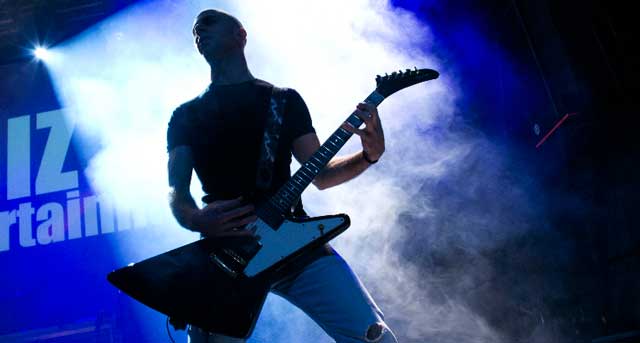 Rockpages.gr : Is there any news for a tour in Greece or elsewhere? What are the future plans of the band?

Tassos Kanellopoulos: ‘Elpis’ was released digitally (iTunes, Amazon) May 21st and its physical distribution began in the beginning of May. To promote the album we are going to do some dates in Greece this autumn, since the summer is a dead period. We don’t want to rush anything; we have to find bands that we go get along with and do a common tour. We are discussing it and hope to book some good shows.
As for Europe, we are thinking about it but we don’t want to do it just to say we did and play to clubs with 50 fans. It has to be organized so you can gain from it. You can’t leave the job that feeds you if there isn’t immediate profit. The best case scenario is to play some festivals to introduce the band to a large audience. Our future plans include recording a new album that will confirm our presence in the scene. Many bands put out an album and wait 3-4 years for the next one. Learning from past mistakes we want the record to be released in 2014. We’ve already began writing it and have about 6-7 songs done; we are really excited about how they sound and can’t wait to record them.

Rockpages.gr : You did some live tributes to Metallica. What does it feel like to play and sing these songs in front of an audience? You’re also doing the black album in its entirety.

Tassos Kanellopoulos: The Metallica live tributes are another side of the band that began in 2007, when we played for the official Greek Metallica fan club, and we continued in a more organized way in 2010. We’ve established that we’re going to do three two-hour sets a year in specific venues. We are very hard on ourselves and strive for the best possible result, for the comparison to Metallica is inevitable. The feeling is of course different when you are performing some of the biggest universally acclaimed metal songs of the last 30 years instead of your own material. Despite that, when you see and hear good reactions from the crowd, it means you’re doing well and it makes you feel proud. The tribute shows helped us improve as players and composers, because we had the opportunity to examine ‘huge’ songs in depth. Also we have a good time doing something different all together. People that attend these things know what to expect. Last year in May we did a tribute to the ‘Black Album’ and this January we played ‘Kill ‘em All’. It was very interesting to play the records in full. They went along very well and we were asked to repeat it. So we decided to do the ‘Black Album’ again, at the new Revenge of Rock, May 24th. There are a lot of timeless songs on that record; that’s always a big challenge.

Rockpages.gr : Which recent album impressed you?

Tassos Kanellopoulos: The last album I heard and really impressed me was ‘Blackbird’ by Alter Bridge, a couple years ago. I wasn’t expecting to hear something new and fresh. The melodies in that record opened up new horizons for me, both musically and instrumentally speaking. A more recent one though, that filled me with passion and made me want to continue this was the ‘Metal’ EP by Jason Newsted. Even though it’s exactly what you would expect, simple old school metal, the tracks are so strong that they accomplish their goal, which is to excite you and make want to play metal. I hadn’t feel this way since as a kid I saw the Metallica DVD ‘Cunning Stunts’ and went and bought my first guitar. Maybe it has to do with the fact that Newsted didn’t make an album for the album but only because he wants to play metal. It’s a big deal for me if a band can make you want to pick up a guitar and play. That’s a big win for any band. This is our motto; we don’t do this for the money but as a hobby, to spread the disease of music. Kostas our guitar player did two videos with Thodoris Ziras, his teacher, to show how to play ‘OCD’ on guitar. It’s going very well and it humbles us when young kids say to us that they are learning ‘OCD’ and are interested in learning more songs. This is what it’s all about, if after 10 years someone hears ‘Beautiful Sadness’ or ‘Infestation’ and remembers Prejudice Reborn, one of my goals will be achieved.