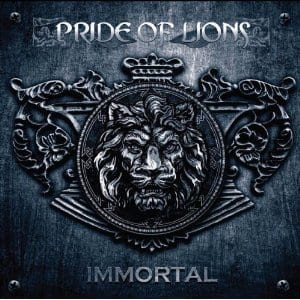 The unstoppable duet of Peterik – Hitchcock returns with its fourth studio record and finally things return to the much missed qualitative level of the first, sensational debut. I won’t lie to you…I was kinda reserved in regards with what I was about to listen from the new Pride of Lions record. You see, the band’s couple of previous releases were not that good but I always believed to that musical outfit that only included two first class singers but most of all one of the greatest AOR composers of all time.
In “Immortal”, Jim Peterik remains steadily focused to the style of writing that shined on Pride of Lions’ first album. That is a brilliant AOR sound reminiscent of Survivor (naturally) and Rainbow (their commercial J.L. Turner era) with a slight modern touch in the production department. The title track along with “Delusional”, “Shine On” and “If It Doesn’t Kill Me” stand out almost instantly not only for the trademark melodic lines of Peterik but also because of the excellent lyrics that abstractly bring in mind the atmosphere of the legendary Rocky soundtracks. That being said, the rest of the tracks are fantastic without any filler in sight whatsoever.
Pride of Lions make one of the strongest comebacks of the year leaving behind them the mediocrity of the two previous albums and returning to the supremacy of the debut record. Well done, guys!
Highlight: Jim Peterik’s composing style remains in the mid-80s forms…and in case, you are wondering, that’s a big compliment!