Mark Shelton is no longer among us. This loss hit closer to the heart than any other. A loss that resonates throughout the entire heavy metal world. Hundreds of fans and fellow musicians declare their shock for the tragic news of his untimely demise and share their personal stories from their encounters with him as well as his immortal music.

Because everyone who was fortunate enough to meet him and have a brief conversation with the man, always profited from that encounter and gained something that will accompany him to the rest of his days. Such was the aura of the man, positive and bright, burning a permanent mark to those around him. Passionate about the Greek culture, he honored our forefathers’ legacy through his art and chose the name Alexander for his son, a tribute to Alexander the Great. A restless and multitalented spirit, extremely educated but at the same time humble like no other. He drew inspiration from global History and Mythology as well as from great authors of Fiction and Horror and crafted his very own mythical worlds.

I observe the photographs that friends and fans share on the social media. Mark is happier, brighter than the person who requested the photo. Because more than a musician and artist, he was a fan. A metalhead. Grateful towards every person touched even the slightest bit by his work, he constructed a relationship of love and mutual respect with his audience and that bond remained intact till the very end.

On Thursday, July 26th, Mark stepped down from the stage of Headbangers Open Air Festival and left this world forever. Doing what he loved the most, surrounded by his band, friends and fans. Today I don’t mourn for Mark but for the metal universe that already burns less bright without its Dragon Star… 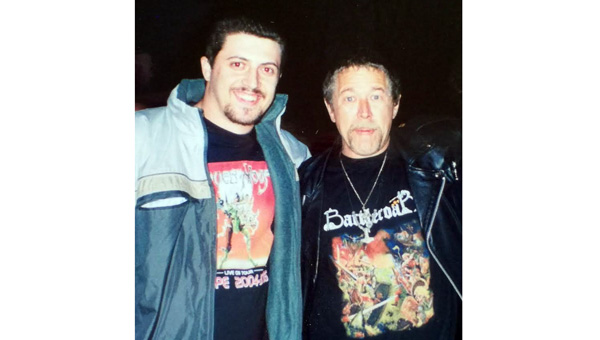