As you probably remember, Rockpages had the pleasure of attending the avant premiere of the excellent musical “Rock of Ages” that pays tribute to the sparking hard rock music of Hollywood in the mid-80s. This writer didn’t need much pressure from his chief editor when the latter invited him to

yet another screening of this brilliant film. Parallel to all this, we got in touch with the person who handles the PR issues of Village Entertainment here in Greece and he was more than helpful in providing us with interviews of three basic stars of “Rock of Ages”: Russell Brand (Lonny), Diego Boneta (Drew) and Julliane Hough (Sherrie).
Sakis Nikas

What was it like to work with Alec Baldwin?

He’s amazing. He’s a beautiful, wise, incredible human being. Everything he says is intelligent. He’s got a beautiful vulnerability about him. He taught me loads of stuff. He’d just come to your trailer, in the middle of the day– Trailer, that’s what you live in when you’re doing a film. He’d go, “Russell, I’ve got this clip from Barry Lyndon.” It’s a Kubrick movie. “Here.” Then he just puts it down on his laptop. And it’s seven minutes long. And you go, “Oh, that’s interesting.” And he goes, and you’re just on your own. I was with my mom that day, and Nicola, my friend. We just had to sit there. And Dan, Big Dan. We had to just sit there and politely watch a seven minute YouTube clip for a man who was no longer even there. Good clip, but then we had to give him an essay. It’s like being at school, being with Alec Baldwin. Because he’s very smart and powerful and strong. Sexy. I like him. I got to kiss him on the gob. “Mouth,” that means in English.

How was your experience singing the songs for Rock of Ages?

I think they make it sound better in a studio. I was listening to me and I sounded a bit more like Michael Jackson than I remember sounding from the noise in my own head. But, like, I am able to do singing. And I did sing it. You have to sing it live as well as singing it in the studio. So, I am doing those things, but they make it– I think they tweak all the dials, don’t they?
Do you think your style is reminiscent of the eighties?

I carry the rock like Sisyphus, who daily has to push a boulder to the top of a mountain only knowing that the next day he’s got to do it all over again. What a drag, man. 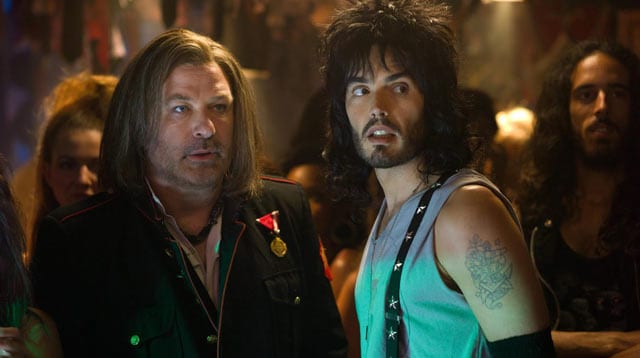 What was it like to work with such an amazing cast?

Julianne Hough: Yeah, our table read was the most epic table read you have ever seen. Literally, we were in a horseshoe with the entire cast. Tom was dressed up as Stacee Jaxx. He had the Arsenal band behind him.

How did you prepare to record the classic eighties songs in Rock of Ages?

Julianne Hough: There were two things that were difficult for me. I had to get rid of my country twang when I sang. I had these flips at the end of the notes that I had to get rid of, and I could not for the life of me hear what they were telling me. I’m like, “I’m not twanging! I’m not flipping!” And then I figured it out. And so my range got really high and everything. So the singing part was really cool, but the second hardest thing was actually– You had to lip sync to the stuff that you already recorded. And we had one guy in particular, Matt, who just would be like, “You were this much off of it. This much off–” And we’re like, “Oh, my gosh, but that tape, performance-wise, was so good! Come on!” So that was really hard.

Diego Boneta: Also something that was a lot of fun was, not only do we get to sing some of the best songs of all time, but we get to find our own voice. When I was training for the movie and taking vocal lessons with Ron Anderson, who’s an amazing vocal coach, I didn’t want to sound like Steve Perry or like Lou Gramm. It was finding Drew Boley’s voice, and storytelling through these songs. And that was a very cool challenge. And Julianne killed it. She sounds amazing. And I had a lot of fun doing that. 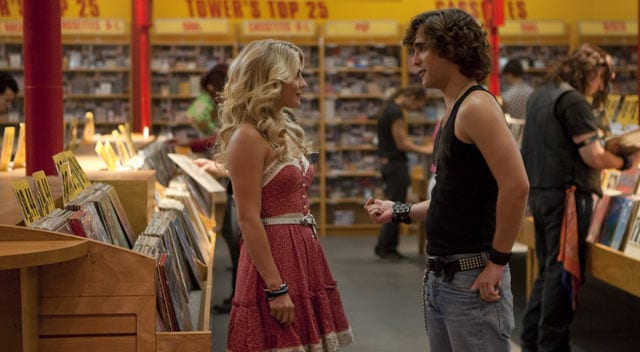 Julianne Hough: Working with Mary J. Oh, my gosh. I love her so much. We became so close. We had such a different– We’re such opposite people. If you could get any more opposite it would be us. So anyways, the cast was incredible. I wish I could have worked with Catherine Zeta-Jones more. I remember the first day she came on set, she wasn’t working yet. And she came in this amazing, sexy white suit. And she walks on and I’m, like, in a bra and underwear about to go perform on a pole. And she walks in and I’m super star-struck. I think I was more star-struck over her and to talk to her than I was to Tom, because that’s, like, a woman, you know what I mean? And I look up to her. And she’s just a movie star. It’s awesome.