A concert including War Dance, Reflection and Sarissa could also be described as a festival of Greek heavy metal. The fans didn’t seem to think that way though and War Dance kicked off in front of a handful of attendants.

But that didn’t seem to bother them at all. There was a lineup change though that raised some eyebrows. Victoras (ex Maidenance) was behind the mic instead of Lefteris and there wasn’t an explanation for that. His vocal talents are undisputed of course and we didn’t worry a bit. He easily got into character interpreting the songs in the best way possible and helped the band present a great show that was applauded from the fans that kept coming during the set. So Reflection were lucky enough to hit the stage in front of a half full and enthusiastic venue.

George Thomaides (Wisdom) overcame his initial nervousness during the opener Giants and showed that his style and powerful voice are fitting to the band’s style. Every single band member was in a great mood, enjoying the show and so was the crowd that kept singing throughout the entire set. Band and audience were like one, reminding us of past times. Every Reflection concert is a heavy metal party and this one couldn’t be an exception. During the usual closing song When Immortals Die, the original Reflection singer Chris Kappas joined George for a duet and the crowd went nuts. The band also presented a brand new song called The Iron Tower, a classic epic Reflection tune foretelling that the upcoming album will bring chills to our spines.

The time had come for Salonica based Sarissa to hit the stage. A band that in my humble opinion has recorded the best Greek demo and one of the top 5 Greek albums of all time. The following was not equivalent though and the group had rough times before securing a lineup after many changes, resulting to a new album after 12 long years. So the night was dedicated to Nemesis and after a warming up with some older tunes, the band presented it almost in its entirety. Judging the performance on the older material, George Chatzisimeonides is surely more comfortable while singing tunes from the demo and I kind of find it hard to get used to his interpretations on the debut album songs. The overall band appearance though surpassed the previous Athenian one. As far as the Nemesis songs, I will write a well rounded opinion through the upcoming cd review and I wouldn’t like to judge the compositions from a live presentation. Having an active Sarissa band around in both studio and stage is a great privilege and it remains to be seen of the lineup will solidify and they will stay on an ascending course. 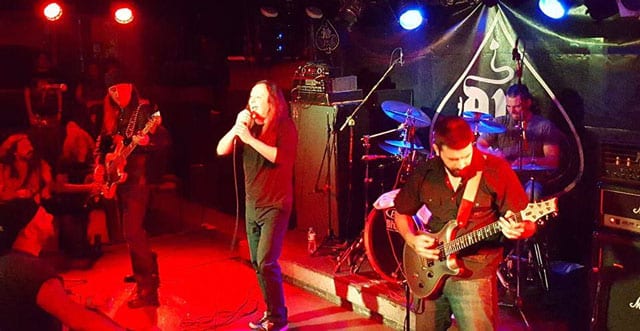