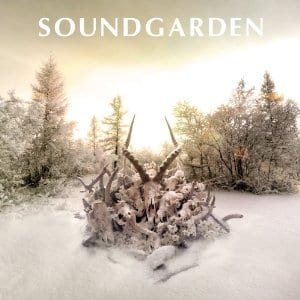 As Chris Cornell puts it in the opening track, Soundgarden have been away for too long. They were missed because they‘re a group with a unique sound and they are timelessly important, far beyond the musical trends that come and go. After a 16-year absence from discography, ‘’King Animal’’ is here to certify the chemistry of the quartet from Seattle. It is 100% Soundgarden, it’s the natural progression from ‘’Down on the Upside’’, made by musicians who enjoy what they do. You will hear the usual weird time signatures, as well as Matt Cameron’s exceptional drumming and of course Chris Cornell’s dominant, magnificent voice.
‘’Why isn’t the record great then?’’ you ask. Because alongside very good tracks ‘’Blood on the Valley Floor’’, ‘’Bones of Birds’’, ‘’Taree’’ and ‘’Attrition’’ there are a few mediocre ones, that don’t match the high expectations that we (should) have from this band. Some tracks one has to search and listen repeatedly in order to find the cool moments, while some have one missing ingredient to become something more. Also the guitars are a little thin, tame and buried in the final mix. In result, Kim Thayil seems like he could offer more to the songs.
Whoever expected a similar triumph to ‘’Black Gives Way to Blue’’ by Alice In Chains, will be disappointed. But that doesn’t mean “King Animal’’ is any less than a highly significant comeback for Soundgarden.