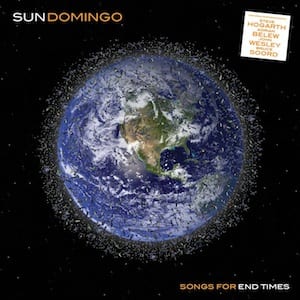 The Dutch outfit has already under its belt two albums (a studio and a live one) and they carry on with remarkable results in the difficult paths of prog rock. On a first listening session, one tend to think that this is yet another Marillion copycat. But this is not the truth…most definitely, Marillion remains an influential force to Sun Domingo but the band has to offer many original elements in the songs. The album should be taken into consideration by all the fans of the genre due to the compositional talent and the technical ability of the band members that give the impression that they are extremely experienced musicians.
In the “Songs For End Times” we get to listen to some very important guest artists like Steve Hogarth, John Wesley, Adrian Belew and Bruce Soord. These is a bunch of musicians that don’t easily make special guest appearances but when they do so, they uplift the respective album to a higher level. Sun Domingo is a qualitative band that evolves ideally in the demanding progressive genre and every fan of that music should pay close attention to them.
The album is available via the official site of Glassville Records on www.glassvillerecords.com .