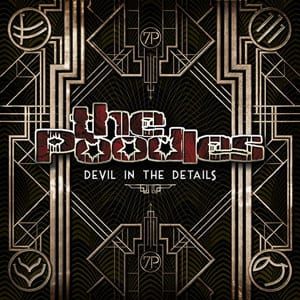 9 years ago Sweden introduced us to the amazing ‘The Poodles’’, whom we learned about from their appearance at the Melodifestivalen. They also became well known with their first album and the hit song ‘’Metal Will Stand Tall’’. The Poodles is a band with a specific identity .You can recognize them between many bands of their age, because of their unique sound. I believe this is what a successful band should have: ITS OWN SOUND. Of course you can’t miss the distinctive voice of Jacob and the compositions of the rest band members.

In my hands now I have the ”Devil in Details” album, which is the sixth studio effort of the band. So far it hasn’t achieved more, than to remind me how successful and underrated the albums before that are. Up to and including the 5th album you can listen to some amazing tracks, which remained nailed in mind, from the very first listening. In this album however, they have not achieved the same feeling. They included some quite indifferent songs, that I won’t even bother to mention, because there is no reason for you to know them. These song are not that catchy like the hits of the previous albums. At least, the sound for which they have been loved, is still there. But, we can’t say the same for the hit songs that made us include ‘the Poodles’ between one of the best Swedish melodic hard rock bands of recent years.

I wish to make clear that a not so successful album, does not condemn a band, especially when they have been so outstanding with all the rest. I just hope that their next release will remind us how great band they are. If you need to pick out some tracks that might be worth to have a hearing, I would suggest the ” The Greatest, ”, “Crack in the Wall”, definitely the track ” Everything ” and ” Creator And Breaker”.