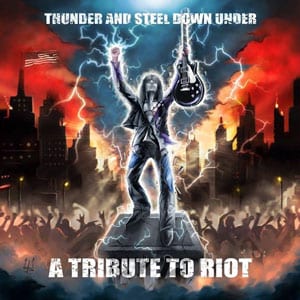 Riot is surely one of those peculiar cases in the history of heavy metal as they never achieved the commercial success that so rightfully deserved and at the same time never reached the popularity levels of other contemporary artists thus maintaining a more or less cult status. The paradoxical fact is that Riot influenced lots of artists around the world (just ask Lars Ulrich what’s his opinion on “Fire Down Under” and you’ll get a rave review) while the late Mark Reale’s compositional talent and technical skills on guitar are widely praised in the metal community.

Skol Records releases this first ever tribute album to Riot with the participation of no less than 14 bands which are equally selected from both USA and Europe. All the bands have tried to leave their own musical stamp on the songs while retaining the familiar style of those Riot classic. I’d say that the track list is quite representative although I’d prefer to be treated with a couple of more songs from the Mike DiMeo era but that’s just my personal opinion and nothing more.

On the definite highlights of the CD we must include the excellent version of “Swords And Tequila” by Savage Master, the neoclassical approach on “Sign Of The Crimson Storm” by Angelo Perlepe’s Mystery and the majestic rendition of the masterpiece “Running From The Law” by the Greek metallers Dexter Ward. Other artists on this album are Axel Rudi Pell, Night Demon, Attacker and many more.

All in all, I highly recommend this release for all the fans of the traditional heavy metal sound.

Highlight: “Thunder And Steel Down Under” will be pressed in 1000 copies.