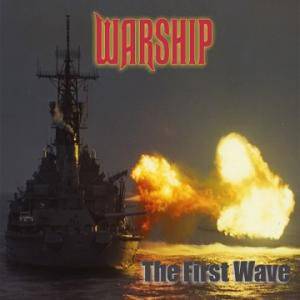 Warship come from Greece; the band has released two demos, one in 2004 and an album-demo in 2006. “The First Wave” is their debut; actually it’s an album the band produced as well. Seven epical songs, featuring certain influences… First band came to mind was Running Wild, plus I’m sure the band really likes groups the likes of Brocas Helm. As I read, band leader Captain Foris is a real sailor, he’s worked eight years as a sailor and apparently the “piratical” aspect looks very appealing to him. No problem at all, on the contrary, we love fast and staccato Metal.
The actual problem is what we don’t like… Unfortunately, production is not the one we expected for such a motif. I don’t have a clue about the way the boys recorded, about budgets and time limitations. Only thing I can do is talk about the music I’m listening to. Rhythm guitar is on top of everything. All other instruments lay in the back, even the voice, even the solos, with the rare exception of “The world’s end”, with the acoustic guitar over the verse. However… when vocals can not be heard clearly and drums sound like kettles behind the riff… Comparing it with nowadays releases, this particular one sounds more like a demo. We do hope next attempt is better. Best of luck to the boys.