What’s you memories from school parties, what would you do if you were a millionaire, what are the first thing you lay eyes upon on girls? We had the chance to get our questions asked from Rick Hagan, drummer of the German party metal band, Absolute Steel. We got the answers plus some knowledge on Rick’s anatomy that we didn’t really want to know about.
Interview by Yiannis Dolas

Rockpages.gr: How did you come up with the idea of Beerrum? How do you make it? I tried to mix beer with rum and it was horrible!!!
Rick: I think you’ve got it wrong. It’s not BeerruM, it’s BeerruN. We got the idea from a Doro fan we met at S.R.F.2002. He told us that where he came from in the states they do a beer run when they run out of beer at parties. It’s basically just an expression for going out to buy some more beer! 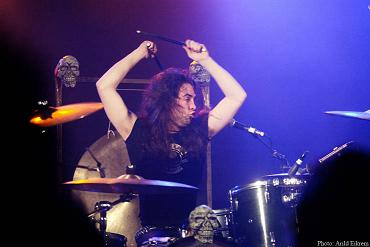 Rockpages.gr: Since you’ ve been playing what you call party-metal; can you remember the parties you’ve been going when you were younger and give us a few highlights?
Rick: At a party I went to once, I found one of the guests coming out of the Bathroom. I looked in, and there was piss all over the walls. He told me that he just wanted to redecorate the walls a bit. We made him clean up after himself and while cleaning he found his own smell so disgusting that he puked over the wall he’d just finished washing! Talk about redecoration!
Rockpages.gr: Your album is called Womanizer, who is the biggest womanizer in the band?
Rick: I posses the best looks along with the biggest dick, but Dave (Bomb, lead guitarist) is the biggest WomaniZer!
Rockpages.gr: Our website is having a party pretty soon, what are the rules for a successful rock/metal party?
Rick: Rent some strippers and blast PanterA and Motley all night! Always remember to tune your air guitar!
Rockpages.gr: Except from High Heels And Fish Net Stockings; what are the other things that you notice on girls? 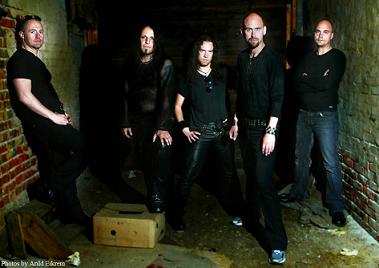 Rick: Tits and ass of course! Long dark or blonde hair is also nice!
Rockpages.gr: What were your influences?
Rick: Deep Purple, Tommy Bolin, Iron Maiden, Black Sabbath with Dio and Tony Martin, Ozzy’s ok too! Everyone in the band loves Mud Slick, Yngwie Malmsteen, Manowar, Skid Row, Kiss, Judas Priest and Motley Crue!
Rockpages.gr: I read on your cv about a spectacular stage show with fireworks, strippers, and other surprises, how does all this help your performance?
Rick: Very few bands dare to do anything else than study there shoe laces, we hope they die! A show is a show! We want to give people a performance they will remember all their life! Full of spectacular stuff like strippers and motorcycles!
Rockpages.gr: If you were offered a contract from a major record company with a million dollars payment each, what would you do with the money? How long would you think the money would last if you; decide to spend it partying?
Rick: No more than a week, that’s for sure! I would buy a new drumkit, a wrecked car and a enormous palace with the biggest harem you could ever imagine!! A set of new strings to my guitar as well! 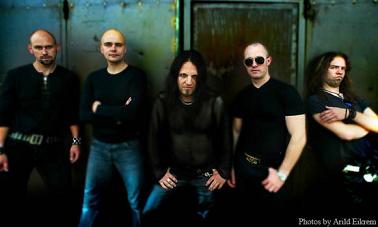 Rockpages.gr: You’ ve been around since 1998, what helps you evolve, mature and get better with your music? More gigs, experience, advice from older bands, women?
Rick: We don’t mature, never have, never will! We have always been up to date musicians and metalheads! We know what we need to know! =)
Rockpages.gr: What are your plans for the future?
Rick: To record and release a new album! We have also some gigs booked for the autumn here in Norway! Next summer we plan to play some festivals in Europe!